Finishing Up the Tencel Scarves

We are now well into our second month with snow on the ground, a very unusual year for the Okanagan Valley. We generally have snow around Christmas, then by mid January it’s gone, gone, gone. We have been having lots of grey days and yesterday we had the dew point and the temperature the same, it was a beautiful sight; frost on the trees. This is the scene from my back deck, looking toward the north. 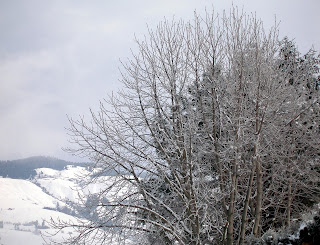 My second tencel scarf is off the loom and already been trotted off to the guild show and tell, and it got very favourable comments, but surprisingly for me so did the one with the purple weft! Using red tencel as the weft really made a huge difference, much more forgiving of any beat differences. I chose to change the pattern to be all over squares rather than runs of pattern. This photo is of the scarf under tension on the loom. The undulations are very well behaved. 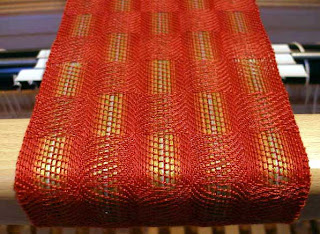 Without tension, but still on the loom, you can really see the puffy three dimensional blocks. 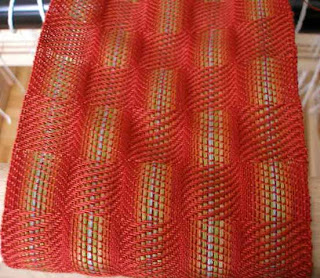 Now all finished and pressed it looks quite lovely, I'm very please with this one. 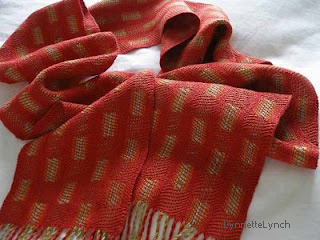 Since I was taking photos in my guest room, I thought I’d show you a set of overshot pillows in 'Cat's Paw or Snail Trails' that I did a few years ago, very classic in blue wool and natural white cotton. 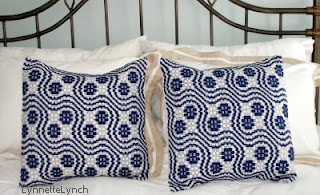 I really like the blocks and overall effects with this scarf! I love the 3-D effect. I think this is why weaves such as waffle weave and laces are so popular as they become three dimensional off loom.

Love those pillows... but why are you showing everyone my 'other' bedroom?

:) Susan, who apparently took a silly pill this morning!

The scarf is gorgeous!! It's great that people were so complimentary at show and tell!! Clearly, they know beauty and quality when they see it!!

I just woke up from a nap, and those pillows make me want to sleep a bit more!! I love the pattern on them. How many shafts (if you remember?) There's a quilt block called Snail Trail that I also love.

Last winter and this winter we've had snow on the ground from December onward....and we don't usually have that weather pattern either. Last winter snow didn't leave our yard til April. I'm hoping this year doesn't follow suit!!

Hi Sue,
I've looked up the pattern and it has one more name 'Wandering Vine' it take only 4 shafts and can be found on page 166 in A Handweavers Pattern Book by Marguerite Davison. If you don't have the book, let me know on my email and I'll send it your way.

Very beautiful scarf - and I liked the purple one too! I'm very impressed by the evenness of your beat.

Thanks for the kind comment you left for me, and I feel just the same about your blog. Always interesting.

Thanks for your encouraging comment. I have visited your site and love the scarf. Complex and extremely wearable.I was very taken by your overshot pillows. I want to make some more overshot cushions but in a contemporary style. I was given Overshot is Hot for Christmas but the threadings are quite hard to interpret. Something like Snailtrail would be a good start.

Thanks for reading and commenting on my work!
Alice
ladyoftheloom

The scarf is fabulous!!!! My favorite colors. The block effect is amazing.
I love weaving overshot and did this exact pattern in towels. Pillows are a great idea.

exquisite work! Can you post a close-up of the scarf? I wonder if it would be possible to weave flat ribbon yarn in as warp, which is what this looked like to me at first sight. I have a bunch of 3/6" ribbon yarn in graduated colors.

Who knows where to download XRumer 5.0 Palladium?
Help, please. All recommend this program to effectively advertise on the Internet, this is the best program!