Bead Leno ~ Everything to Learn

With Bead Leno sometimes the beads can get tangled because they can’t get clear of the twist from the previous shed, this is caused partially by tension and how close the beads are set, I think, at least that seemed to be my problems! To break up the clumps I had to strum the beads with my fingers to break up the clumps. After I had finished the scarf I was reading up on Bead Leno and one of the tips was to raise the treadle that lifted the heddles that had the warp threads that didn’t have the beads and that would clear the shed. In my case that was shaft #2, I wish that I had taken a photo, sorry. Also wish that I had read that sooner!

I also had a little problem with the tension. Every time that I advanced the warp the left hand side of the scarf was getting softer and softer. I kept trying to firm up that edge until I had made the centre as tight as a drum. Then it happened . . . a warp thread snapped as I was trying to clear the beads. Thankfully it wasn’t a thread going through a bead so it made for an easier fix. I added another thread that dangled from the back in a film canister. Another film canister with six pennies was hooked over the troublesome left side of the scarf to help with my tension problem, which added much needed tension. 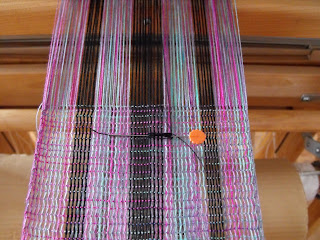 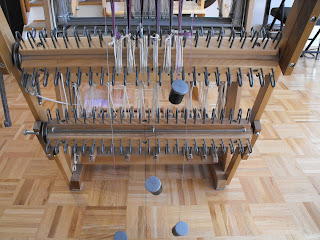 The next learning experience was adding to the weft. The bobbin was getting emptier but I was able to see the end of my warp so it was a race to see which one reached the end first. Well it was the weft, so I had to learn how to add on. Bead Leno is a single weft thread and then a space so there could be no doubling up as that would have showed in the final project. Luckily the Tencel was 2 ply so Mum showed me that I could untwist the Tencel down about 1 inch to make two separate singles, then pull one single off; a pulled piece is better then a cut piece as the pulled fibres are easier to incorporate then a sharply cut piece. Do the same process to the new yarn to be added to the weft. Then take the two pieces and twist them back together to make a newly doubled yarn, with a little drop of Fray Check to help the two pieces to stick together. It sounds a little confusing but the photo will make things a little clearer. 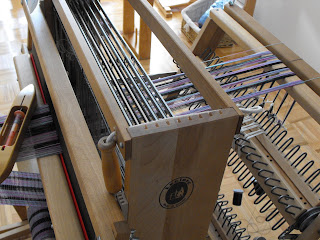 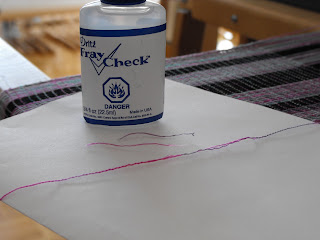 As I was weaving the scarf I wasn’t sure if I liked the black stripes because what I like about Bead Leno is the twist, which is highlight with variegated yarn. Within the black stripe the interest is the lacy effect and the coloured weft. But the more I wove the more that I started to really like the black stripes. Although I think that the Bead Leno structure is more interesting when represented by the variegated colours. 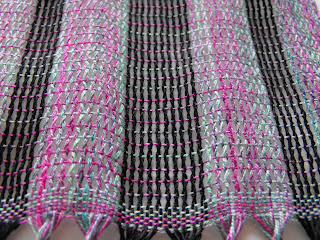 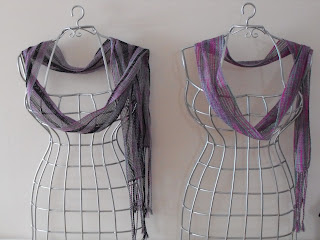 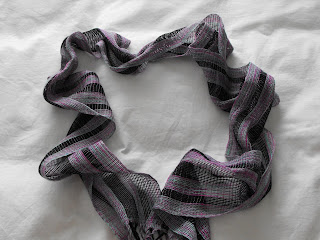 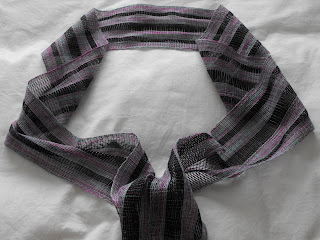 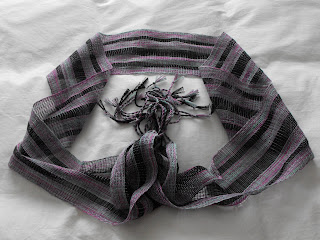 Ngaire, your description of the 'problem-solving' you did was very good. Even I, with my limited knowledge of weaving techniques (near zero) was able to follow you. It looks great off the loom.

Bead Leno is a weave I have never tried. Your post gave me a good idea about how it works! The scarves are lovely.
-Renee

Great job on the latest scarf!! It's interesting how the black changes the whole look of the scarf!

It helps me so much to know that other weavers end up having stuff hanging off the back of their loom by the end of a warp. That inevitably happens to me....and I dislike it - mostly because it makes it harder for me to advance the warp.

I was trying to see from your pictures, but couldn't quite tell....is there a trick to hanging the film canisters so that you can advance the warp without fiddling with them??

Great job on your weaving and on this excellent blog post!!! I'm signing up for a bead leno workshop at our next weaver's guild meeting, so I can see bead leno in action finally!! You guys have made me curious!!

What a wonderful scarf!!! Your post makes me want to give it a try myself. Thanks for such a comprehensive
description.

The scarves are lovely! I have always wondered how bead leno was worked.

Lynette, this is so interesting! Great photos and explanations for these bead leno posts.