Now that I’ve finished weaving the Fleur de Lis pattern, I have to move the heddles back to where they belong.  That means dealing with the dreaded ‘biting penguins’, so two birds with one stone is the way to go.  I took this opportunity to order some new heddles and some new texsolv cord for the loom and to do some overall maintenance.  I’m showing the maintenance routine for my Louet Spring Loom, but the same principle applies to any loom. 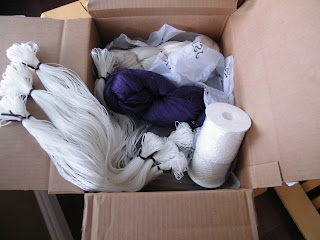 I decided to order 400 new heddles so that the next time I want to do an unbalanced weave again they will be there, ready and waiting.  Jane Stafford Textiles is just one Gulf Island away from me, so I got my parcel the next day, what a bonus.  I also thought that after twelve years of hard work, my loom deserved to have the cords on the spring mechanism replaced; so a 50 metre bobbin of texsolv was added to the order.  Hmmmm free shipping over $250 was just the incentive I needed to order these lovely skeins of 2/20 bombyx silk! 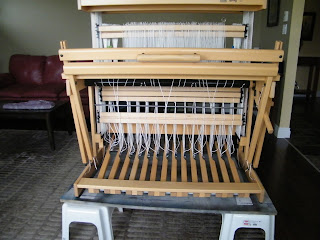 I started by lifting the loom up on four small step stools to bring everything up to eye level.  The loom is lightweight enough that this is an easy job. 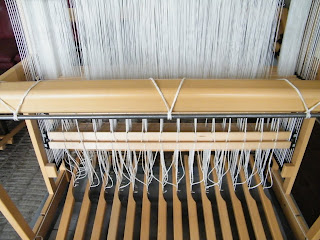 I unfurled the front and back beams to check the condition of the texsolv cords and to ensure that the beam bar was level ~ it’s amazing how just a few centimetres off true can make a huge difference when weaving the fabric web.  I re-centred the cords on the beam bar to level it and it looks good. 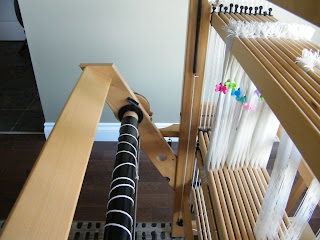 I took off the texsolv cords from the spring tension apparatus and cut two replacement cords and attached them to the spring and around the guide and finally to the front of the loom. 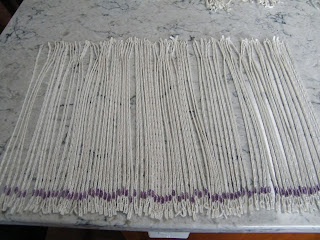 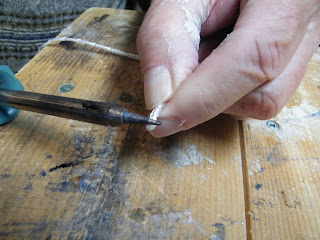 I asked my husband to use his soldering iron to melt the ends on each of the newly cut cords.  I now have 95 cords for each the upper and lower lamms and that should deal with even the most unbalanced of weave structures.  That sounds like a lot of treadle cords, but even a balanced weave on 12 shafts and 12 treadles takes 72 of each size.

I counted all the heddles and removed the hundreds of extras from shaft 2 and 3 and put them back to where they belonged and then I added the new heddles to the first 4 shafts.  I now have 150 heddles on shafts 1-4 and 125 on shafts 5-8 finishing up with 100 on shafts 9-12.  Whew that's a lot of heddles! 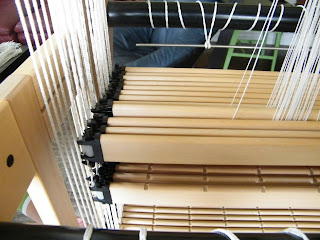 Now that the heddles were all in place I noticed that one of the shafts was riding higher than the others so it was time to go back to the ‘biting penguins’ and fiddle with the barrel screw on the shaft to align it with the others. 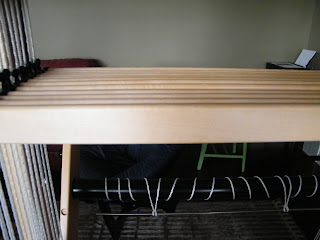 In this case I had to lower the penguin head one bead down on the cord and then loosen the lower part of the shaft, but it looks good now! 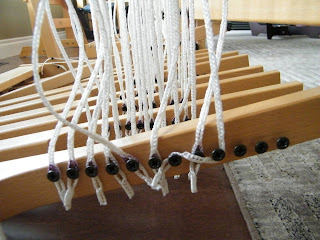 One issue I had begun to notice on my last couple of projects is that the treadle cord will sometimes catch on one of the screw buttons on the treadle and then I come to an abrupt halt which always catches me by surprise! 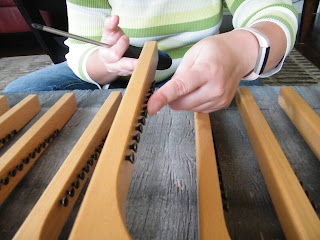 This can be caused when one screw button is protruding a bit more than its neighbours.  I had Ngaire run her fingers over the buttons and then she tightened any that were outstanding.  Jobs a good’un!

Since I have the loom up on the stools I tied up my treadles for my next project, then down she came and onto my final jobs. 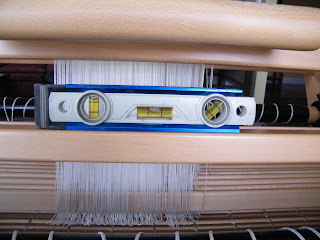 I replaced the beater and made sure that it was level.  If your beater is crooked, then your web will beat on an angle.  If it had been off true I would have inserted a small piece of thin cardboard under the reed to ensure its level.

Lastly I walked around the loom with a screwdriver and a wrench and check if any of them were loose, I’m always surprised that at least one or two screws need tightening.  A good vacuuming is the finishing touch.

Our garden is always surprising us, and one of the Trumpet Vines (Campsis tagliabuaa ‘Indian Sumer’) has produced a number of these huge seedpods.  They are the size of a small banana! 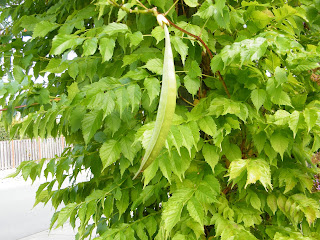