It Keeps Getting Bigger

In the last blog post I had just pulled the 2/12 blue Merino wool for a throw.  I emptied the cone and there was less than half of what I needed for the throw.  So I pulled out a large cone of pretty pink 2/12 Merino wool.  After finishing this cone there still wasn’t enough so back to the stash.  I pulled out a small cone of dusty rose 2/12 Merino wool.  Finally I had enough threads for the throw but the dusty pink cone had such a small amount left on it that I decided to finish the cone and add it the throw.  The throw got wider by 2 inches. 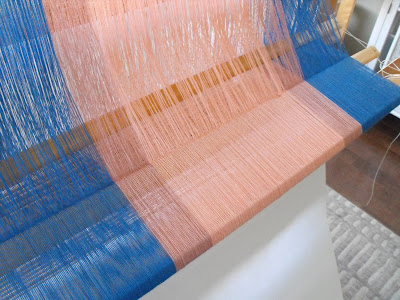 The throw was planned to be blue with some random flecks of colour added to it.  Well, it now is a pink throw with blue edges.  The throw is over 900 threads so it took a lot of heddles and a lot of time to thread. 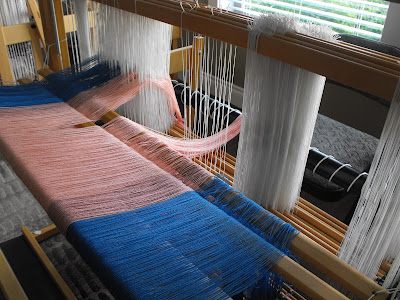 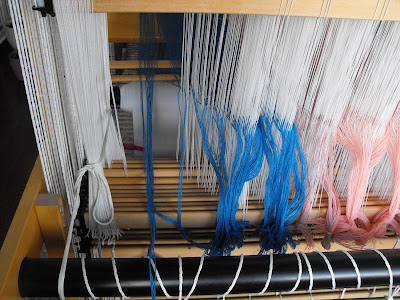 Originally I decided to sett the throw at 30 epi but when I had sleyed about 2 inches in a 15 dent reed it looked far too dense.  So I changed to 28 epi and used a 14 dent reed, but, I had forgotten to account for the change of sett when figuring out the width in the reed.  So I got to half way and realized that it wasn’t working and I had to start again and re-sley the reed.  The throw again got wider by 2 inches; the throw is now a whopping 34 inches wide! 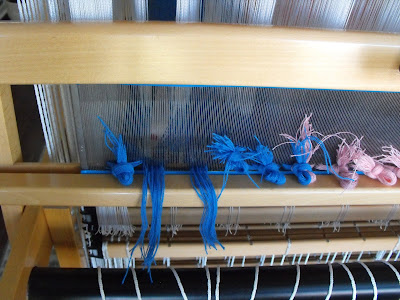 I have tied on the warp and now gosh, doesn’t it look pretty. 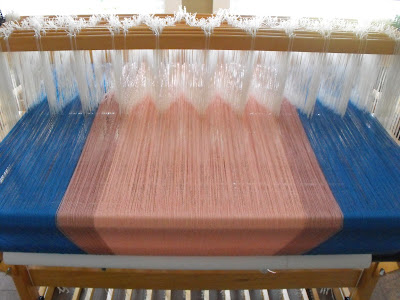 The plan for the weft was to use a large cone of 1/4 blue wool that was purchased at a Guild sale.  Well, a closer look at the fibre had us wondering; and it turns out it isn’t wool even though that's what is hand written on it.  The first hint is the sticker which says Wabasso, which was a large cotton textile company from Canada that made cotton sheets and other things.  After a burn test, it was confirmed, the cone is very definitely cotton. 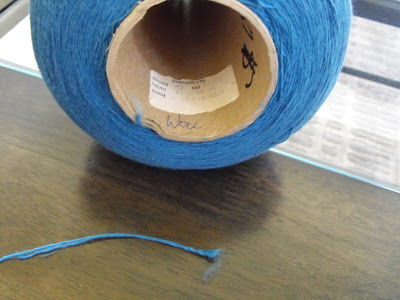 I’m not going to use the blue cotton, it would make the throw too heavy.  I’m going to be using this large cone of white 2/24 Merino wool.  I’m going to double it so it will be 4/12 which will match the grist of the warp.  Here's hoping it works because I'm almost out of options. 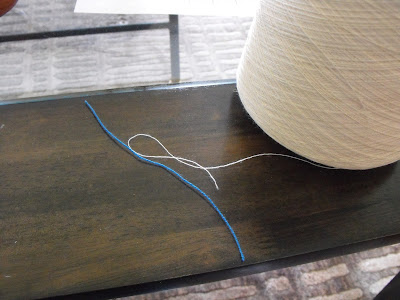 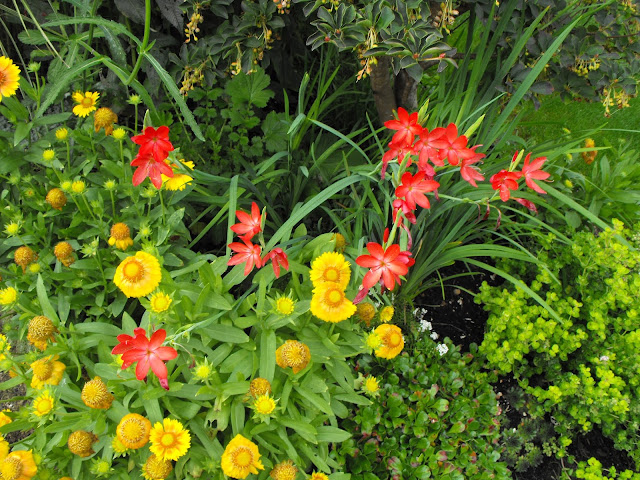 This IS why we have large stashes-so we have options. The upside and downside. So hard to use things up...at least for me.