If you remember from the last post I wrote, I was planning to use some of these small bits of 2/8 cotton for my warp.  I worked at the computer for a very long time trying to get stripes of colour and a pattern to work. 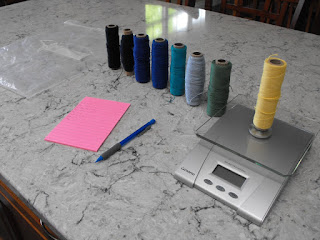 In the end I ended up only using one cone of royal blue from the little bits pile.  But the colours for the warp are bright and happy which makes me happy too.  The final colours are in the middle, the royal blue, turquoise, emerald green, peach, pink and white. 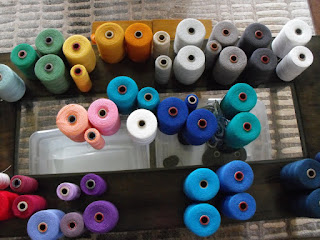 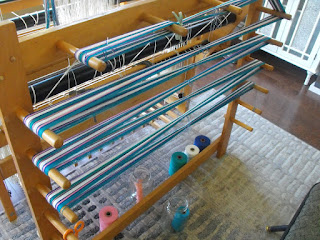 The Louet Spring has a build in raddle at the top of the loom.  It makes quick work of spacing out the warp in preparation of beaming the warp.  But it also comes in handy in double checking your work, this time I missed ten threads in one stripe but I was able to fix it before beaming the warp.  I used to have a Leclerc Minerva and I would lash on a 5 dent raddle to the top of the loom and use it the same way. 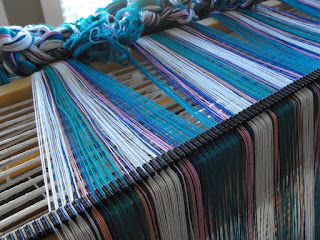 I use heavy white bond paper as the separator for the back beam.  We found a very large ream of it many years ago, we are still using it.  I cut new warp paper at the beginning of the year as by the end of the year it is starting to tear from the pulling on it.  I like to cut two different lengths, one 6 yards and one 12 yards.  I use the 12 yard one mainly for tea towels. 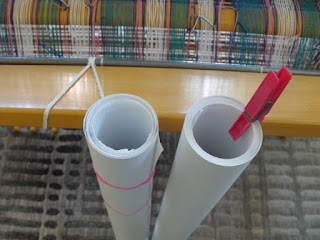 There was a rainy day last week and I was able to quickly thread and tie the warp onto the loom.  But it has been nice the rest of the days I’m still working in the garden so the warp is sitting waiting for me. 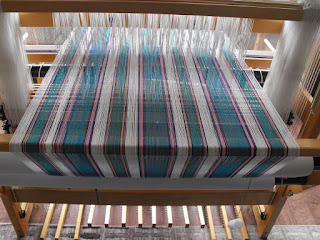 I pulled out some 2/8 cotton cones that I’m thinking about using for weft.  They are sitting on the corner of the mantle waiting for me to start weaving. 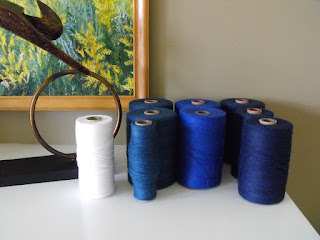 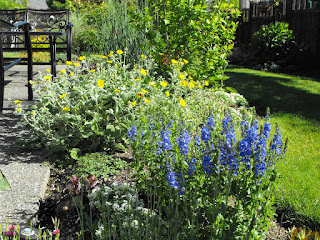