My loom is still sitting empty, but looking back at past years of the blog April/May have traditionally been slow in terms of weaving.  It is definitely because it's Spring and the garden seems to be moving, growing and blooming at a break neck pace.  So sorry, again no weaving but you are getting more garden photos!

The dwarf rhododendrons (Rhododendron yakushimanum 'Princess') are just starting to bloom.  They have a pretty pink candle that become lovely white flowers. 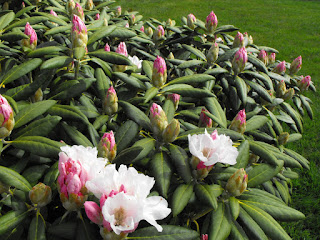 The dwarf Fothergilla (Fothergilla gardenii 'Mt. Airy') is also starting to bloom.  There are two in the garden because the pretty white and lime bottlebrush flowers smell lovely in the spring and the fall colour on the leaves is nothing short of spectacular. 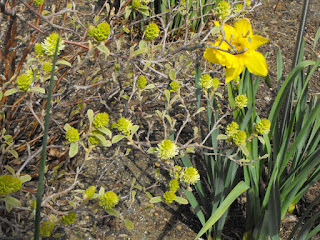 The Laceleaf Japanese Maple (Acer palmatum 'Orangeola') burst into leaf this week.  This garden bed has been enlarged this year because the maple is taking over the garden.  Some green sedum were added under the maple for some interest but already they are hard to see. 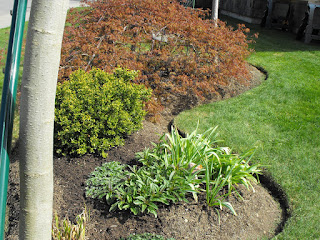 Last year the inside of the house was painted and this year it is the outsides' turn.  We have almost finished the prep and hopefully we will be painting in a couple of days if the weather stays fair.  The plan is for a big colour change, so fingers crossed on our colour choices! 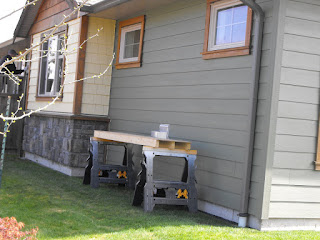 The Mexican Orange Blossom (Choisya ternata) is super close to blooming.  It has a tight cluster of white flowers that smell very much like orange blooms, so very lovely when in bloom. 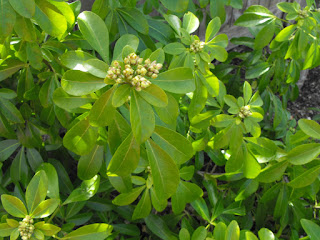 A week later here is the same Japanese maple (Acer palmatum 'Mikawa yatsubusa') that I showed you last week, with the Rock Cress (Aubriea cultorum 'Royal Red') under it.  Amazing how fast the garden is changing with our abundant sunny days. 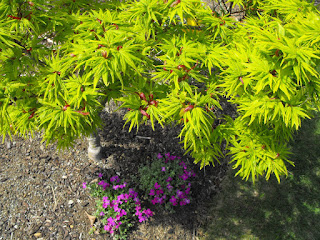 An update on the orange tree (Poncirus trifoliata monstrosa 'Flying Dragon citrus'), it has tiny leaves and large balls that will soon be the flowers.  It may be happier this year because we got rid of the three large Hinoki cypresses that were sharing the garden bed with it.  This garden by the front door is looking very different now without the Hinoki gobbling up the space. 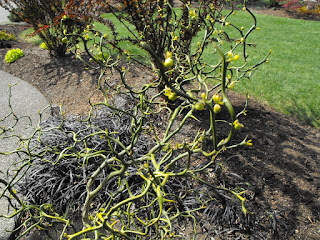 A Covid update, here in BC we seem to have flattened the curve and now we are in a maintenance period.  The British Columbia government is now talking about starting to ease some of the restrictions in May, so a bit of good news and some light at the end of the tunnel.
Posted by Ngaire at 10:18 AM