I have been home for a couple of weeks now, and I’m ready to jump back into my weaving.

South central Spain was amazing and The Great Mosque of Cordoba was probably one of the most beautiful things I have ever seen.  The Great Mosque was begun in 784 and when the Christians conquered Cordoba in 1236 they built a cathedral within the existing mosque.  This place is massive and the Cathedral was built without demolishing the existing Mosque, it is a stunningly beautiful and wonderful place.  The other places that were beyond expectations were The Royal Alcazar in Seville and the Alhambra in Granada, but after weeks away, it’s always nice to be home.

Now back to what is on my loom.  I belong to a study group within our guild, called Exploring More and our challenge this time is to design, weave and frame a piece that could be displayed on a wall.  Sounds easy, right?  I thought so too when I suggested it. 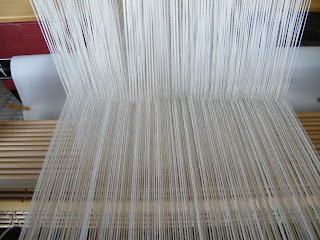 I started looking for things I wanted to weave and the more I thought about it, the less sure I became.  Finally, in a bid to get something on the loom I put on a natural 2/16 cotton warp 2 yards long with 280 ends, 10 inches wide on the loom and sett at 28 epi. 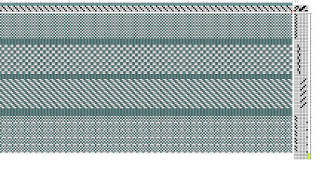 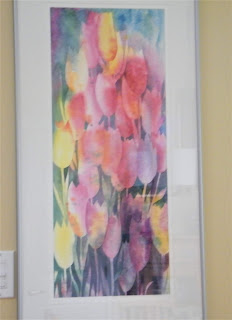 Now that I’m ready to begin I went searching for something that would look good on my studio wall; and since I love flowers I started there.  In my dining room I have a lovely watercolour of tulips and that was my inspiration.  I love that this painting is just a suggestion of tulips rather than being too literal, so right up my alley. 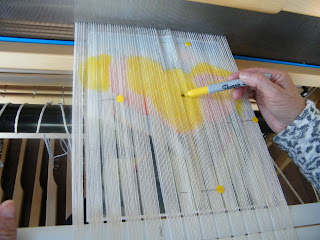 I still wasn’t sure how I wanted to weave the tulips so I took some coloured sharpies to the warp to rough in the general shapes. 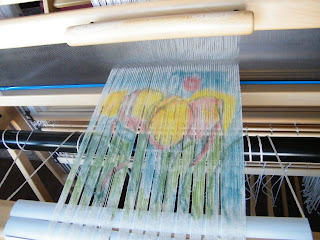 I’m sorry that I didn’t photograph my efforts so far, but first I started just laying in colour in the general shapes I wanted using the Italian inlay method.  It just looked lumpy and bumpy, so that came out.  Then I started laying in colour blocks in a tapestry method and that was just far more work than I was willing to do, so it has all be pulled out too.

As it stands right now, I will use the natural 2/16 warp cotton and just weave this off as plain weave, then I plan to paint over my rough outline and perhaps do some embellishments.   Hmmm, I have a feeling that going at this all loosey-goosey wasn’t the best idea.  I still have lots of warp to play with, so that's my task for the next few weeks.

The garden shot today is a photo of one of the front garden beds in full autumn glory. It is Dwarf Fothergilla (Fothergilla gardenii 'Mt. Airy) with Japanese Silver Grass (Miscanthus sinesis 'Sarabanda' in behind. 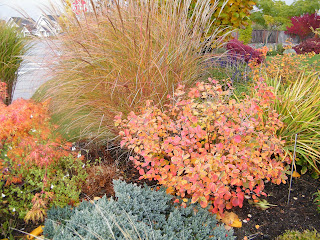 I have always loved that tulip painting in your home.... so I'm quite interested to see how your interpretation of it come along. Does your new sewing machine do embroidery? Maybe you could add touches much like Jane Evans did with her painted weavings.
Painting with thread! Love it....