The AVL was a little dusty from being in storage and there were some greasy marks around the handle for the folding weaving deck. I was able to clean the greasy marks off with a combination of VIM and Murphy’s Oil Soap. It is amazing to see the difference. 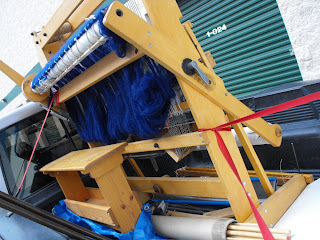 The AVL came with a couple of issues that needed to be fixed before I can weave. The treadles had come off so just needed to be bolted back in. Of course some bolts needed to be tighten after five years in storage. But the main thing was the top pulley had split in half. 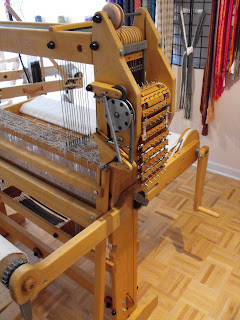 I had never seen an AVL before let alone a mechanical dobby so I didn’t know how integral the pulley is to the loom. It is the connection between the dobby system and the treadles without it the loom doesn’t work. Thankfully, my Dad is handy and so he was able to come up with a solution. He laminated oak to the sides of the pulley; the grains are running in opposite to give extra strength. By using the original piece it fits perfectly and there is no change in the tension of the system. We call his solution the Hamburger! 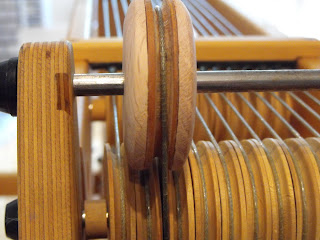 The aprons on the loom had some holes in them so my Mum cut off the worse off it and re-sewed the aprons. They are really pretty now! Also the front apron was much larger then the back apron, at least twice as large, so they got swapped. 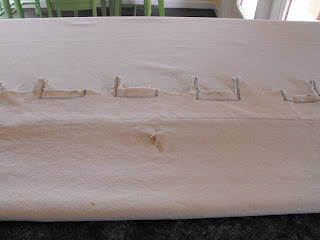 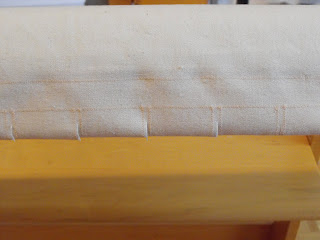 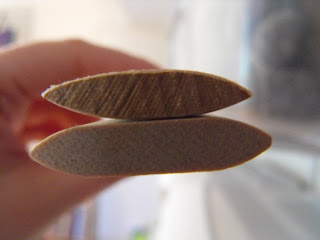 I am endlessly fascinated with this loom so here is a closer look at the dobby system. There are trestles or bars that move around a cog. The trestles are held in a chain with either C rings or with plastic strips. When using the plastic strips a half peg is needed if the shaft is to move so it can hold down the strip but not interfere with the pattern, you can see it on the far left in the picture. Behind the cog are thin strips of metal that correspond to the shafts. When the trestle is even with the strips the pegs hold down the shafts. So where there are no pegs the shafts go up. 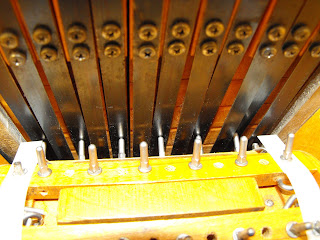 Mum and I have taken turns pressing the treadles so the other person can watch the system work! One of the many things that I didn’t know was about the treadling. It turns out the right treadle does all the work of lifting the shafts. The left treadle clears the shafts and moves the system to the next trestle. So the right treadle is much heavier then the left, I wonder if my right leg is going to be much larger and stronger than the left!

I am really excited about this loom and I have my first warp planned and colours chosen . . . can‘t wait!
Posted by Ngaire at 11:43 AM

It's great to have a handyman around the house! The AVL looks very complicated, I'm impressed how you managed to put it together.

The loom is coming together nicely... and I like the 'hamburger fix'

Looks like you might need to do exercises to build up the left leg so you don't walk in circles :)
(I'm kidding!!)

We are all looking forward to how your first project comes together!

Your so lucky, great loom and tons of extras!!! WOOHOO can't wait to see what you weave on her.

What a lovely find, this AVL loom. Great to have the family get it fixed, ready for weaving. I look forward to your next project on this loom.