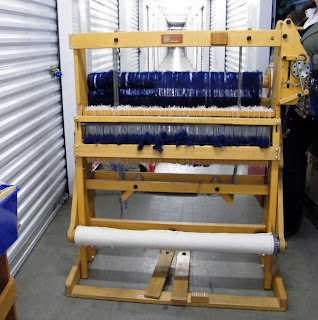 There was an interesting ad in the guild newsletter this month for an AVL mechanical dobby. Mum and I were talking about it so when the lady called asking Mum about donating books to the Ponderosa Guild library, Mum asked about the loom. We mulled it over some more and Googled it. Then we went to see it! Here she is being released from her former home in the storage locker. 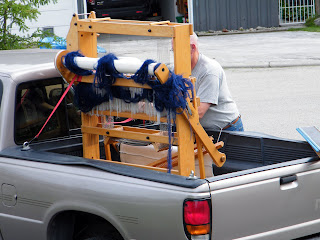 The loom was built in 1981 and is one of the prototype mechanical dobby looms made by AVL, its’ production number is 217! It has 12 shafts and the weaving deck with the cloth and back beam swing upright for easier warping, threading and storage. It is a little smaller then Mum’s Louet Spring but has the same weaving width and shafts! Avril came with 90 bars and lots of pegs so lots of ideas are bouncing around in my head for the first project! 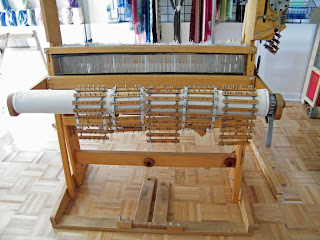 This is my first loom so when I received a bunch of accessories I was really excited! 2 AVL end feed shuttles with 13 pirns and one long bobbin style shuttle, I don’t know who made it but it has a jumping stick figure one it. If anyone can identify it please let me know. 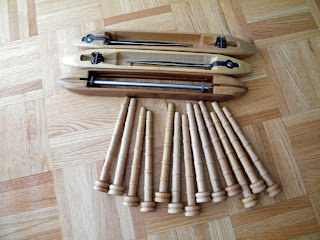 Three reeds and a raddle. 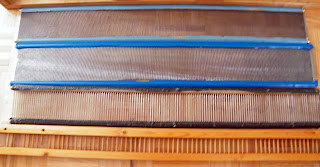 A bunch of tools – McMorran Yarn Balance, a Linen Tester, a corduroy slasher and the much needed peg wrench! 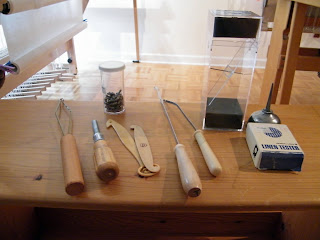 A bench from Woolhouse Tools with a nifty little box in the bottom. 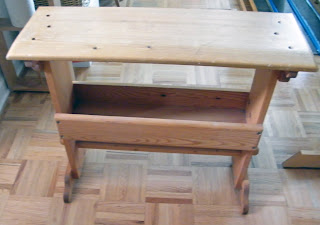 Two different sizes of Texslov heddles, some work for Avril and the little ones work with Mums Louet Jane which is lucky! 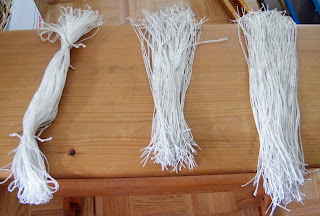 A Leclerc 14 yard warping board, there is some missing pegs but I also got some doweling that can be cut down to replace the missing pieces. 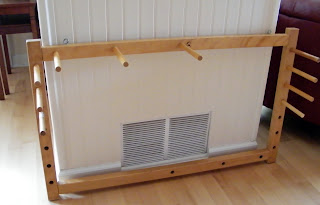 The last picture is of the lease sticks, warping sticks and some metal doweling which I am not sure what was intended for but I will be using them for the aprons so I was really happy to see them.

I am really excited by this loom all the possibilities for projects are dancing through my head (and Mums!). The one thing I am missing are the instructions which will probably show up in the next couple of days if they can be found, but if anyone out there has information on how to operate a mechanical dobby and is willing to share the information, I would be most appreciative.
Posted by Ngaire at 11:53 AM

I have a manual for the AVL 12H Folding Mechanical Dobby (I used to have the same loom) if you are interested let me know where to email it.

I think we have the same loom. :) I posted a bit about my first time using it at http://tangibledaydreams.blogspot.com/2009/12/learning-to-use-dobby-loom.html . If you don't get the directions, let me know--I have a set, and can copy them.

I have three of the stick figure shuttles too, that I bought at the Fiber Factory in Mesa, AZ. They work great...but I'm blanking on the brand name.

congratulations for your new loom!! It looks great

Congrats on your new loom Ngaire!
Its so exciting isn't it?

Stick figure shuttle? They are called little man and made by Mr Howell. Mr Howell has passed away now but his shuttles are out there and much loved!
To check if we are talking about the same stick man... look under topic shoppping at my blog and look under tools...there is a picture of my little man shuttle at the listed blog post.

Any idea what your first warp will be?

I like the name! I have number 150, made in 1983, of the CompuDobby I. I have the wrong manual, but it doesn't matter yet; it's all Greek to me so far. Keep us posted on your journey with your new loom, and maybe it'll help me get started with mine!

Oh, what a grand score! Lovely loom. Your shuttles sound like Howell's Little Man shuttles. You can see them here.
http://www.villagespinweave.com/IBS/SimpleCat/Product/asp/hierarchy/0604/product-id/31292459.html

What a great find! and more fun times ahead.

Hooray for new looms! I name my looms too :)

I hope that you come back as I don't have an email address for you.

Hi Susan,
I am thinking that the first warp is going to be crackle or twill.

Ngaire - how exciting ! Welcome to Avril, I hope we will see lots of her on the blog. I have no knowledge of an AVL loom so will look forward to some lessons maybe !
Isn't it great to see comments from folk who know these looms and can identify the shuttle for you. Even to find loom number 150, what a great thing the internet is !
Enjoy learning all about it !

That's fantastic, how exciting! I look forward to read more about avril!

I've posted the file to Google Docs (https://docs.google.com/fileview?id=0B1uLOuT9E0LYYzZjN2VmODEtZWQ2NS00Mjk2LWJmMDQtOWNhNDkyY2Q3MWNk&hl=en). I'll leave it up for a day or two.

Thanks so much! I have just reached a point where I need some help and with just a quick look I have my answer.

Ka-CHING!!! You hit the jackpot! Oh, I can hardly wait to see what you produce with her!

What a find!!!! I'm so happy for you. I have two AVL end delivery shuttles each a different size and I love them.

i have a loom just like yours that I inherited and recently got out of storage. I'm trying to figure out how it works, from setting up, to understanding tension and advancing the warp. i have the manual but its not very helpful. any help is appreciated!

Hi Susan,
I wish that I could help you but I sold the AVL after only 6 months. I would try the websites Weavolution and Ravelry there may be groups there that can help you. I wish you luck!
Cheers,
Ngaire

P.S. I don't know how to contact you so I'm posting here and on your blog