Rya Knots ~ It's Just Shag by Another Name!

I’ve been working on and off on a small rya piece for the weavers test I'm doing. I put the warp on my Louet Jane table loom and that was my first mistake; the wee Jane loom just isn’t doing well with the high tension and hard beat needed to cover the 8/4 natural linen sett at 8 threads per inch. Consequently I’ve been letting it sit, but today I decided it was the day to finish this small sample piece.
Here’s a short tutorial on creating a rya piece. 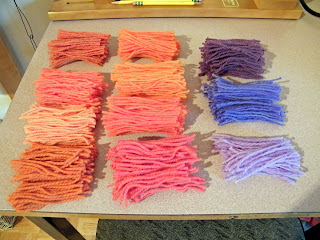 These are the colours I’ve chosen to work with. I’m doing colour blending for each Ghiordes (pronounced yor-deez) knot, so I have pre cut my wool to 4” lengths. The length is necessary as the tail of the knot must be longer than 1-1/8” and up to 6” and must lay flat to fall into the rya category; a shorter tail would make it stand upright and it would then fall into the Flossa category. 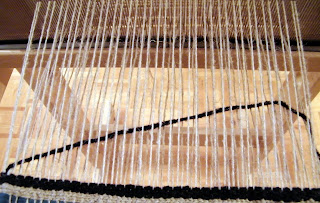 After doing a weft protector, which in my case was Weft Twining which I demonstrated here; I began with a 2 ply wool border. You've got to give the wool ample allowance so it can cover the warp yarns, so it is laid in on a very steep angle. 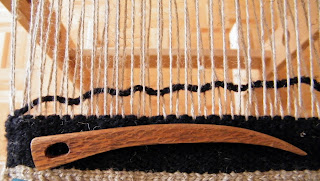 Then you bubble the weft to ensure good warp coverage. I’m using a wooden needle for this job, but a knitting needle will work as well. I've woven in a 2 inch wool border before the first row of knots, the large border is due to the fact that the knot tails will cover about 1-1/2” of the border and only ½” will show. 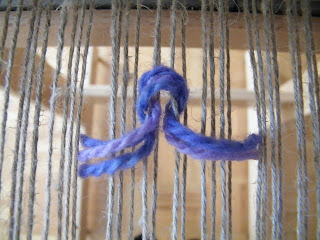 This is one variation of tying a Ghiordes knot; by the way the knot is named for a town in Iraq and is also known as the Turkish knot and the Smyrna knot (another town in Iraq). In this photo the yarn is placed over two warp threads and then the tails are tucked between. In my actual woven piece I am tying the knot over three threads. 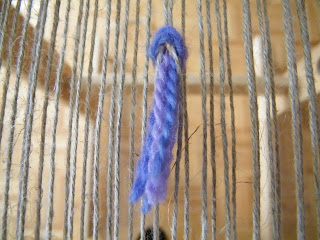 When pulled downward the knots tighten and remain in place, the more you tug on it the tighter it gets. 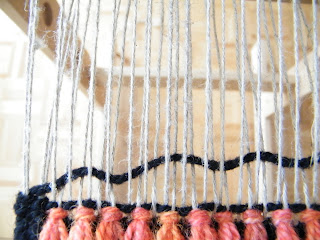 Rya knot rows are set quite far apart as traditionally the edge of the new row of knots should only just cover the previous row of knots. I have decided to overlap by ¾”; consequently I am weaving 10 picks of background wool between each row of knots. The shaggy appearance is normal, but I've got to admit that I'm not a big fan.... 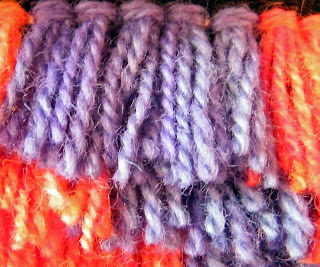 If you tie knots right up to the edge of the piece it will tend to curl under, so 2 sets of doubled warp threads are left unknotted at the selvedge. These warp ends are filled in after the knots are tied by winding the weft in a figure eight between the two sets of ends to build it up and to keep them in line with the knots. This treatment is known as ‘argatch’. 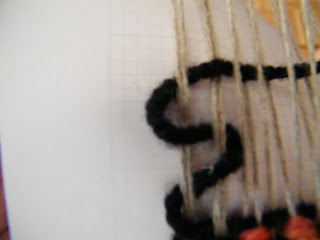 To join the background weft I unply both ends and splice them seamlessly together. 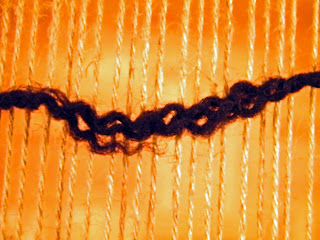 I'm bound and determined to finish this piece today!
Posted by Lynnette at 4:10 PM

This is a useful tutorial. Thanks.
And I love the pleated scarves in your previous post.

I'm not a fan of 'shag' either but I'm anxious to see your finished piece because the colors you've chosen to work with are lovely.

I love the colours you have chosen and what an interesting knot ! Will look forward to a picture of the finished piece as I am struggling to picture it !

Oh, man! I just love shag rugs! I had so much making mine earlier this year! I'm going to try your methods!

Thanks for sharing...
Susan

Thank you for showing this, I never quite understood how it is done before now. It sure looks like a lot of work!

This is something I have on my To Do List for someday. Thanks for the great tutorial!

I haven't woven a rya rug in, oh about 35+ years. Now you have me day dreaming about it!

Very interesting. I would love to see the finished piece! I will have to bookmark this to try later.

Thanks for taking the time to get this tutorial all ready and posting ing! Wonderful! I can't wait to see your finished piece.