In the first half of the year my weaving study group looked at how to draft a motif using different weave structures, which inspired me to write the blogs on how to draft in Huck Lace, Summer and Winter and Diversified Plain Weave.

For the blogs I used an angel fish as the motif but for the study group my actual motif was a crown.  I really liked the diversified plain weave version of the crowns so I wove it back in the spring.  I didn’t post anything about it because I was thinking about seeing if Handwoven magazine would be interested in the project but the publisher for Handwoven magazine went into bankruptcy and nobody was sure what was going to happen to the magazine.  Thankfully, the magazine has been saved by a new company called Long Thread Media which has been founded by Linda Ligon, Anne Merrow and John Bolton.  I have decided not to send in this project because I don’t think that they would be interested in an 11 shaft, 14 treadle project as it is quite demanding.

I decided to do the diversified plain weave crowns as tea towels.  The warp is unmercerized cotton in 2/8 and 2/16 in two shades of purple with the thinner grist being the darker shade of purple.  It was a lot of threads and really hard to keep count. 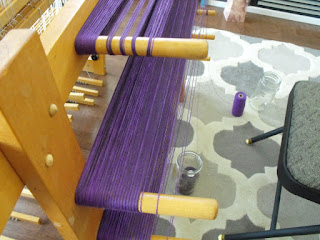 The thing with diversified plain weave is that it can take a lot of heddles.  There are two plain weave threads for every pattern thread.  My crown pattern needs 11 shafts.  I was able to use the extra shaft to ease the burden on Shaft 2 but there was 187 threads for Shaft 1 so I had to steal some extra heddles from another shaft plus I still had to make some extra string heddles. 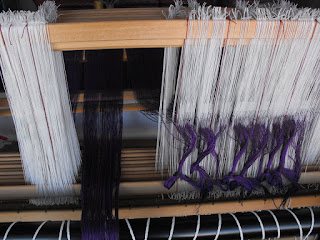 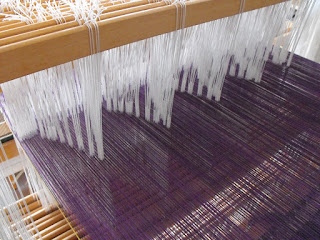 For the weft I used gold unmercerized cotton also in 2/8 and 2/16.  And hey, my pattern worked, I can see crowns! 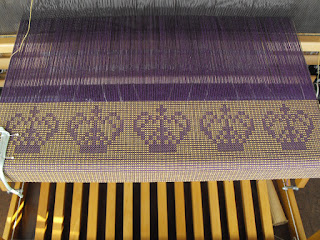 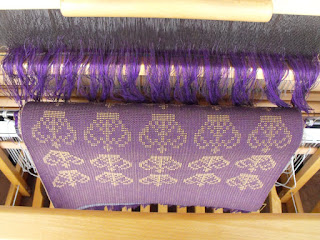 Here is the stack ready to have the hems hand sewn.  The original plan was for four tea towels but they are so heavy and dense that they are better suited to be table runners.  If I was going to weave them again as tea towels I would sett them looser, but it is hard to know with diversified plain weave what should the sett be because of the two different  yarn grists. 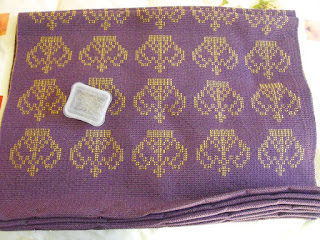 These table runners are real stunners and they will make exceptional gifts for anyone who hankers for that royal theme! 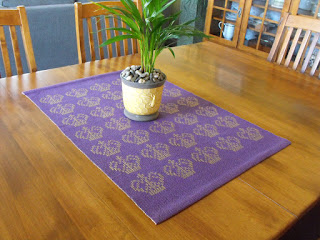 Final Garden Shot is of a Hydrangea paniculata Vanilla Strawberry.  The large flowers start off creamy white and fade into light pink then into dark strawberry red as the weather cools.  So pretty! 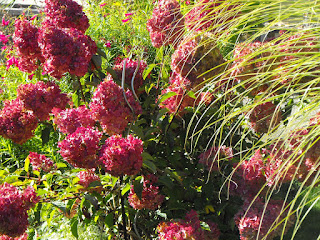 Your crowns are amazing! ( I wonder if a certain Elizabeth would be interested? 😁) I can't see those being around for long as they are beautiful....

Those crowns are - WOW!!! Beautiful from both sides...can't choose a favorite.