This weave is my personal horror story ~ I have made one mistake after another.

First off, I had made the warp last year for hand painting ~ and for some unknown reason I put two blue stripes in the warp ~ why? 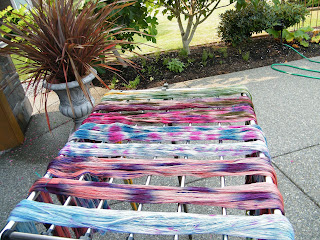 The warp started out with sea coral tencel with two blue stripes and I painted it with purple areas, very similar to this one. You can see how similar they are on the drying rack. I knew that I didn’t want the same thing again, so I decided to send it back to the dye pot.  This time I chose to put in lots of colour, big areas of teal and purple over the entire warp, which was a real improvement, but what a time waster. 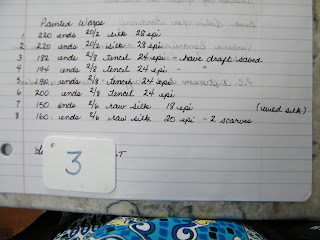 I had made myself a list of how many threads were in each warp last year and beside #3, this warp, I had written that I’d already chosen the pattern.  Yeah.....but what did I call it and where did I save it?  I couldn’t find the pattern for love nor money and wasted hours looking for it!

I decided to go with an old favourite called Twill Complications; a lovely pattern with lots of interest.  The warp went on the loom beautifully and I had it through the reed and tied up when it was pointed out to me, by my darling daughter, that I had used the wrong reed, and the sett was far too tight.  I pulled it out of the reed and started again. 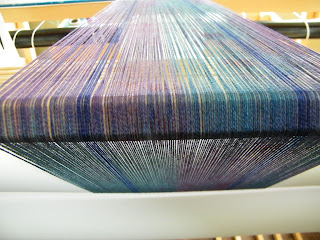 Now it was time to audition the warp; I am always amazed at what looks good. I chose the greyed teal second from the top. 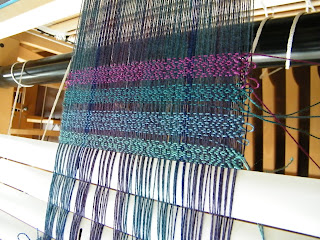 Weaving the pattern is always a joy, but, first I had to fix a sleying error! So only a partial re-sley. 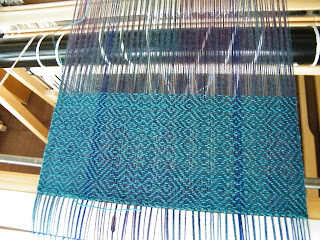 As I was weaving I noticed that the stripes were not hitting the pattern in a similar place, so back to the computer and a good fiddle around to see if it could be fixed.  No luck with this pattern, so I tried several others with no success, yet more wasted time.

I decided to re-thread the loom with 3/1 twill because of those darned stripes.  I could not find a pattern that centered them.  Since my lease sticks were long out, and I couldn’t easily re-insert them; I decided to wing it.  Right there I should have stopped, but no.....I carefully pulled out 12 threads at a time and re-threaded 1-2-3-4 X 3, tied the bout and moved on.  As I progressed with this it became a bit of a dogs breakfast with extra heddles and uneven numbers of threads, but I carried on. What hubris! 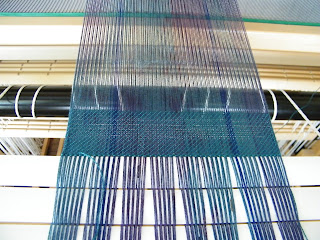 And then I saw it ~ I have one thread out of order on the left hand stripe!  I have a single blue end two places out of whack!

I have unwoven it yet again and  with a partial re-thread and re-sley I have moved that lonely blue thread back to nestle with its friends, but I am completely humbled! 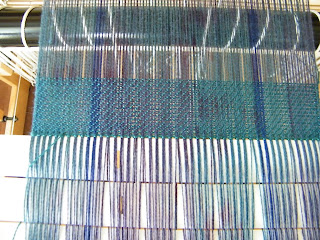 The garden shot of the week is of Gaillardia grandiflora'Arizona Apricot (Blanket Flower) and pretty purple Verena rigida 'Ventosa'. 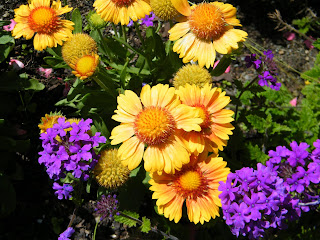 Hi Lynette, I am so glad this also happen to you sometimes the warp is just unforgiving. I have a summer and winter threading on my one loom which needs to be re-threaded completely as my horizontal pine tree doesn't look like a tree, and my warp are to busy for all the busy patterns that I am weaving at the moment.

... and what a lovely two inches it is! Seriously, I like the colours and pattern and who ever buys it will never know the grief it caused you. They will feel very pretty wearing it.

I have had projects like this where nothing you do is right and it all goes wrong. I decide to get through it regardless and take it as a personal challenge. You get there eventually but somewhat 'humbler'. 😳

That's the kind of woven piece you can never charge enough to make up all your time, and yet you're eager to see it leave your sight!

Thanks to all of you for your commiserations ~ it's always good to know that this kind of mess up happens to us all. There definitely is strength in numbers!