Mum and I went to ANWG in Victoria BC during the Canada 150 weekend.  We got up early on Friday and headed down island to Victoria, a two and a half hour drive.

We only went to the Marketplace as none of the courses held any interest for us.  We got there just as the doors opened and already there was a crush of people. 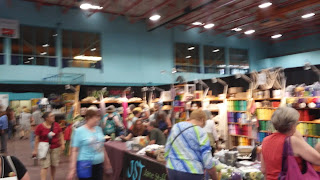 The booths were full of yarns sorted by type and colour.  It was just amazing to see. 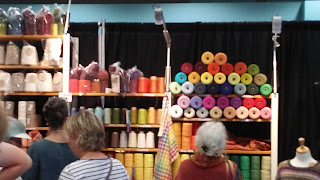 There was only one booth that had any weaving books, unfortunately we already had most of them. 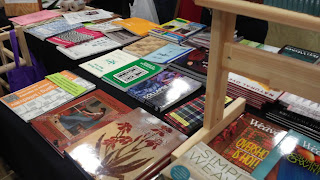 I also took some photos of the guild booths that I liked.  The first is from Eugene Oregon it was quite simple but very effective.  Big samples from their Study Group, does the weave structure look familiar?!  It’s Crackle! 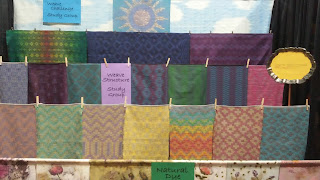 I am not sure which group this one is from but it was definitely the most moving.  The guild had lost a member and the booth was in remembrance of her, Dorothy Day.  Using her dyeing materials and they dyed and wove a scarf inspired from colours of Daylilies.  It was lovely. 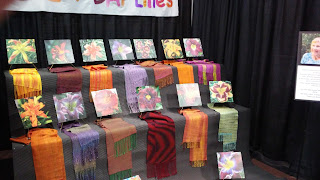 The next booth is Seattle guild and they used large wooden plinths to drape their tapestries and scarves over to look like the Seattle skyline. 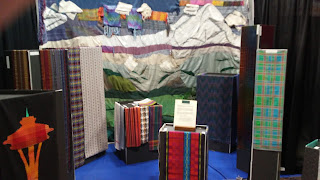 I think that this is the Boise Valley Guild and they made items from Bigelow tea bag string.  Bigelow throws away a lot of the tea bag string that they can’t use and this guild was able to use it in their weaving.  It was amazing.  Every weaver that went by said “I wonder how I can get some”! 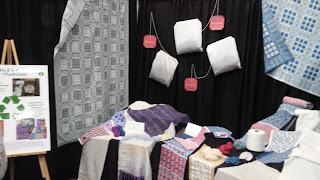 The Greater Vancouver Guild booth shows that simple can be really effective.  They have tea towel butterflies flying around their booth. 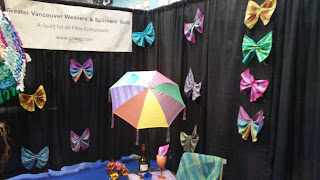 The Salem Fiberarts Guild used a photograph of their natural environment to inspire their weaving creations.  It was beautiful. 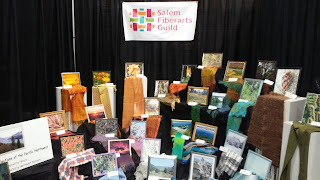 It was a lovely day, and it was nice to see old guild members from the Okanagan.  The next ANWG is in Prince George in two years.  Maybe see you there!
Posted by Ngaire at 4:12 PM

Thanks for the pics of the booths! I love those tea towel butterflies.