This is the  Pima cotton that we previously split from a large cone of  six ply cord.  We were able to break it down into these six balls and they are approximately 2/10. 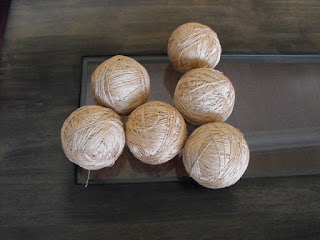 I pulled a warp that was six yards long for this project.  I wanted to do three different sizes of table runners; one at thirty inches, one at fifty inches and one at seventy inches.  Now that it is on the loom you can still see the kink from the being un-plyed. 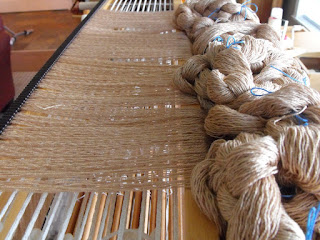 The weft colours I have chosen are a 5/2 black perle cotton, which according to my math will be just enough to do the fifty inch runner.  The second cone is 2/16 royal blue cotton there is lots so it will be the seventy inch runner.  There three cones of Orlec in different shades of green and one will be my choice for the thirty inch runner.  Sorry for the blurry photo 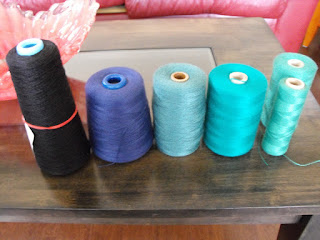 I was going to weave the longest runner first but Mum said do the smallest first because if I run out of warp at the end the smallest runner could be too small to work as a runner but if the longest runner was a couple of inches too short it wouldn’t really matter in the long run.
So on to weft sampling for the small green runner;  it is quite hard to photograph greens but the three shades are a dusty green, a fresh green with a little blue and a green with a little yellow. 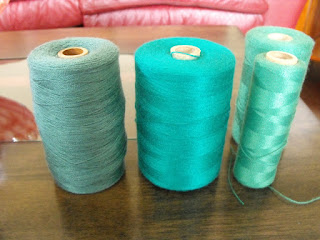 The pima cotton is a lovely shade of wheat so I thought that the green/blue colour would work but nope (it is the one on top).  The clear winner is the green/yellow.  And this is why I sample every possible colour because I really never know what is going to work. 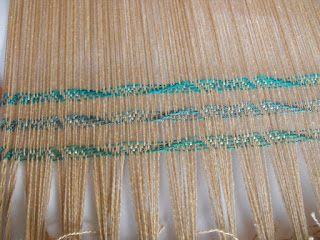 I had two mistakes to fix at the beginning of the weaving.  I had a threading error on one edge of the runner.  Instead of 4-1 I reversed it and went 1-4 so the twill was inclining the wrong way.  In about the middle of the warp I had what I thought was a threading error but it turned out to be a denting error, three in a dent instead of two. 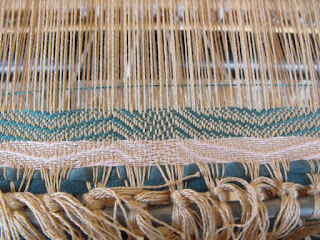 I also had a pirn winding problem.  Sometimes the thread is put on the pirn a little loose near the end because the thread is starting to burn going through my fingers.  And when it pulls through the end feed shuttle it can tighten on the pirn and it makes a bit of a squirrels nest.  So, the only thing to do is pull it all out, untangle it and wind it back onto the pirn. 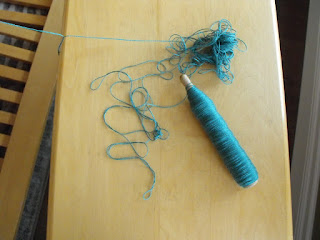 I have three different treadlings for this draft, which is one of the reasons that I picked it for the three runners.  Here is the treadling for the green runner which is the smallest; it is a chain of diamonds running the length of the runner. 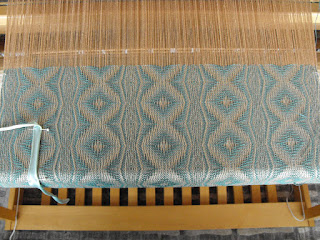 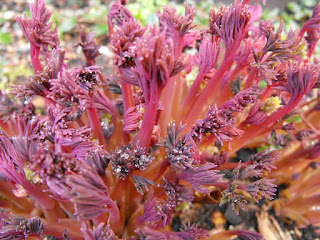 Love the treadling. I can see it being very versitile. Would it be part of the snowflake family?

Interesting how there appears to be a reddish aura around the green in the section you've woven. Could be just the camera, or could be how the colors play together in real life.