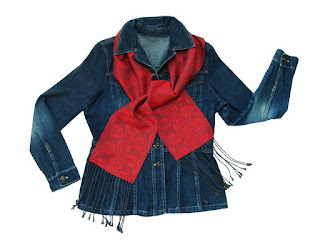 We had somebody on Etsy buy all the red scarves that we had online in the WovenBeauty store.  So I needed to replenish the store with a new red scarf.  I like it when I have a direction to go with.
There are three reds in my Tencel bin - a Scarlet from Webs, a Cerise from Brassards, and Burgundy from Webs.  The pattern that I chose is an advancing twill and the warp is Charcoal grey. 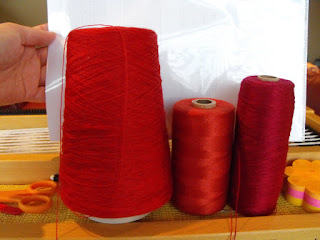 Below is the weft auditions and the winner is the scarlet from Webs the bottom line.  The middle line is the cerise from Brassards and it looks like tomato soup, a bit orangey.  The top line is the burgundy which wasn’t red enough. 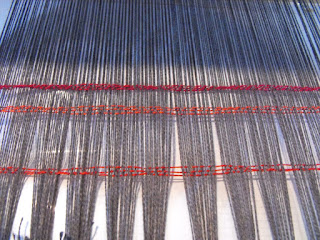 The pattern is very graphic with the large ovals and the X in the middle.  It is hard to see here but the centre panel between the ovals is quite pretty too.  I liked it so much that for the next scarf I lengthened those panels. 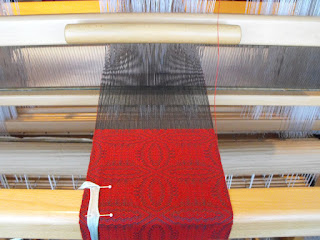 The weaving was exciting because the right hand floating selvedge would shred apart and the film canister would fall to the ground with a thump.  It happened at least four times.  I am not sure why it would break apart, I think that it could be a burr in the reed dent or the way that the thread was hanging off the loom was untwisting the thread allowing the thread fall apart.  But the finish project looks good. 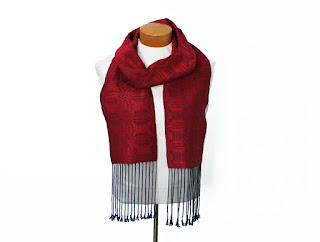 The final garden shot is a Deodar Cedar (Cedrus deodara) that was heavily covered in water droplets and it just sparkled in the sunlight. 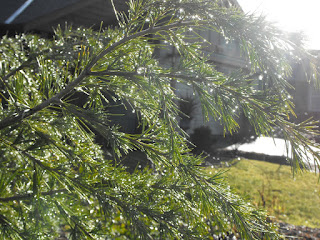