Hi!  It’s me, Ngaire.  For some reason I stopped blogging last year but I didn’t stop weaving.  I miss having a journal with pictures of each project so I am going to start adding to the blog again.

So let’s get started.

January 2013
Every year I make the same two resolution with regard to weaving, one is to use up the ‘oh shit’ pile.  The scarf was a Hand Dyed Cotton and Orlec that I had run out of weft on so I had added blue orlec in a Fibonacci sequence.  I didn’t really like it so I cut off the stripes and re hemstitched the scarf and made a new fringe.  It worked but the scarf was shorter then normal so I didn’t know what to do with it.  It was given as a gift to someone very small!  The piece of blue Tencel yardage was removed and I made into two 5 in 1 Shawl/Shrug/Capelet/Tunic/Wrap but that idea didn’t come until July.  I still have the other colourful yardage in Tencel and I hope that 2014 is its year to be featured. 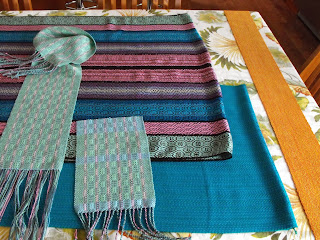 The second resolution is to use up the weaving stash.  I like to pick a yarn and then work it into something and this time I picked three cheeses of Linen/Silk blend that had a small slub.  It was a disaster!  The yarn was very hairy, sticky and dusty it was a misery to pull onto the loom.  The picture shows the fibres that I had to pick out from between the lease sticks. 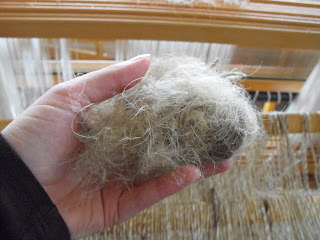 Finally  I started weaving it and the fibres were flying off; there was a line of extra fibre behind the reed which really made the fibres bridge, and they were bridging even more between the heddles.  The plan was to make table runner but it was too hairy and prickly feeling.  It is the first time that I have ever cut off the project but there was no salvaging this piece! 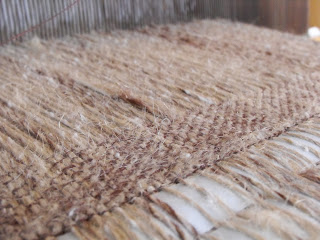 Bookmarks using Bamboo 7 warp and with Silk weft in different colours.  The bookmarks were woven in Turned Summer and Winter in motifs that looked like insects, tribal and abstract.  They were woven on a Louet Jane Table Loom, with three bands on bookmarks, two black and one taupe woven at the same time.  Twelve were woven but only two found new homes.  For but not currently on Etsy – they should be though, because they are lovely!!! 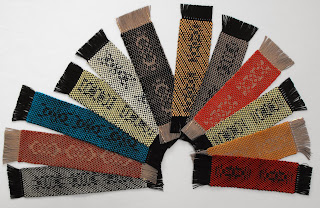 I did the piano scarves again.  I sold one at Christmas and just added the new listing for the second one I wove.  The piano scarf doesn’t get the interest that I thought it would on Etsy and I don’t really enjoy weaving them.  So after I finish the chenille I don’t think that I will be doing them again.  For . 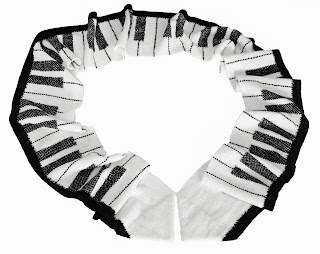 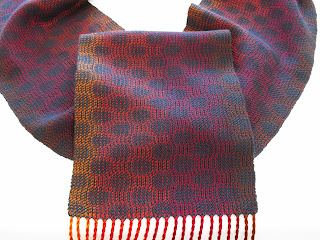 My first go at an Ombrè affect.  The warp for the two scarves was 2/8 Tencel using bright orange, scarlet, burgundy and flowing to a warm brown.  The weft for the first scarf was 2/8 Tencel in Navy Blue and was woven in twill polka dots.  Love this pattern! Sold. 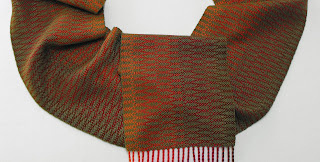 For the second scarf the weft was Olivine 2/8 Tencel and was woven with a modified treadling that created little ferns along that scarf.  Sold. 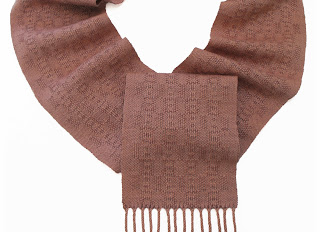 The warp for the scarf was super fine Merino Wool in Dusty Pink.  The weft was Ramie which is an ancient fibre from made from nettles; it’s similar to linen.  The pattern is M’s and O’s woven in blocks.  For . 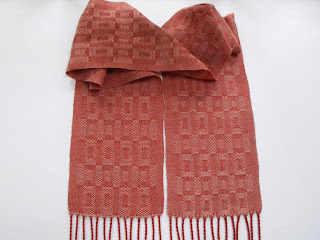 I used the same M’s and O’s pattern but I changed the warp to Sea Coral and the weft was the super fine Merino Wool in Dusty Pink.  The blocks ended up different sizes because my beat changed – I must have been rushing to finish.  So this is my scarf and I love it! 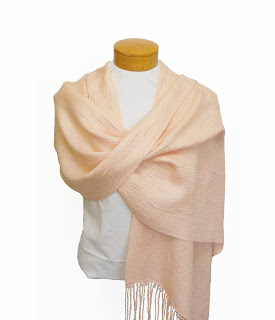 Etsy has a huge Wedding section so Mum and I decided to branch out into Wedding Shawls.  The warp is 2/8 Orlec in Soft Peach with long subtle stripes of slubby rayon in orchid pink and cream; the knops of rayon add visible interest and texture to the shawl without overwhelming it.  The weft is the same Soft Peach Orlec woven in a Broken Basket Weave.  At both ends of the shawl there is 6 inches of cross medallion motifs picked out in a soft pink Orlec.  The twisted fringe frames the subtle natural Freshwater Pearls and Japanese Delica seed bead detail studded within the fringe.  For . 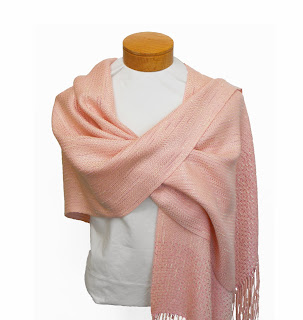 The warp is 2/8 Orlec in Blush Pink with the same long subtle stripes of slubby rayon in orchid pink and cream.  The weft is the same Blush Pink Orlec woven in a Broken Basket Weave.  At both ends of the shawl there is 6 inches of cross medallion motifs picked out in a soft pink Orlec.  The twisted fringe frames the Swarovski crystals and Japanese Delica seed bead detail studded within the fringe.  For . 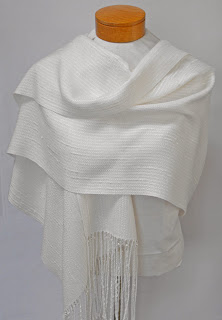 The White Shawl warp was 2/8 Tencel in White with a slubby Silk for added interest.  The weft was 2/8 Tencel and the pattern was a Broken Basket Weave.  The twisted fringe frames the Freshwater Pearls and Japanese Delica seed beads.  Sold. 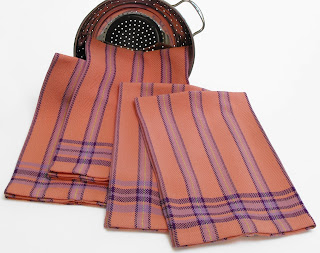 Spring totally inspired these tea towels.  Made from 2/8 Mercerized Cotton the towels feature peach with the three shades of purple in stripes with a shot of lime green in the centre.  Both ends of each towel has a plaid border in purple, each border is unique.  The pattern is a Herringbone Twill.  I used two different peach cottons in the weft - two towels in each shade and that made for two different colours and feel to the towels.  Sold one and have 3 more For Sale. 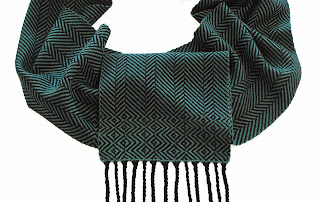 Two scarves were woven in a modern asymmetrical twist to the classic pattern for Herringbone Twill.  The warp was fine Merino Wool in Navy Blue.  The first scarf was woven with 2/8 Tencel in Mineral Green and features a border of diamonds at each end.  The twisted fringe has been hand wrapped in green Tencel for a special finishing touch.  For . 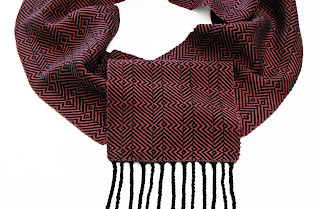 The second scarf was woven with 2/8 Tencel in Sea Coral.  The treadling was changed to make boxes and chevrons.  The fringe was also hand wrapped in pink Tencel.  For . 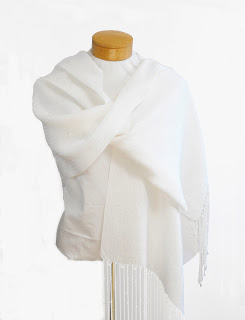 The first White Shawl sold quickly so I was able to weave another one.  The warp was 2/8 Tencel in White with a slubby Rayon this time for added interest.  The weft was 2/8 Tencel and the pattern was the Broken Basket Weave again.  I ran out of white Tencel while weaving this shawl so I phoned Susan asking if she had some Tencel and she did!  Mum and I made a mad dash down (a four hour round trip) to pick up the Tencel.  Thanks Susan!  The twisted fringe frames the subtle natural Freshwater Pearls and Japanese Delica seed beads.  For .

So that's half way through the year.  With so many pictures I decided to split this post into two ~ catch you later.
Posted by Ngaire at 2:31 PM

Ngaire, I was wondering why we had not heard from you in a long while. Absolutely love the peach shawls, they are just perfect for a spring wedding. Lovely really lovely.