Life is Just Too Darn Short So Cut It Off!

I realized that my weaving had gone pear shaped about 1 inch into the 12 Shaft Drall piece. I planned the runner meticulously and on paper it looked wonderful. I was going to use fine black linen as a weft, but I was still weaving in my header when things went dreadfully wrong. 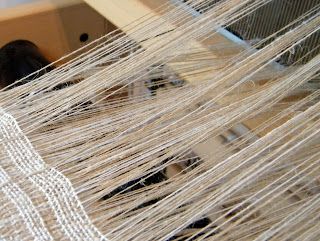 This photo is in front of the heddles.

It was soon apparent that the singles linens just didn’t want to separate even after going through the heddles. As soon as the shaft lifted each thread seemed to grab onto its’ neighbour like a life line. No amount of strumming or moving the beater made a difference. 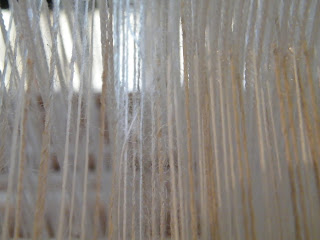 It was just as bad behind the heddles, except I had the added advantage of nice little pills of linen being produced to make nice snarls and uneven tension for me! 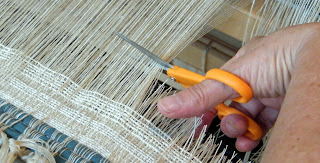 So, without further ado and as cavalierly as possible; I cut it off!!! 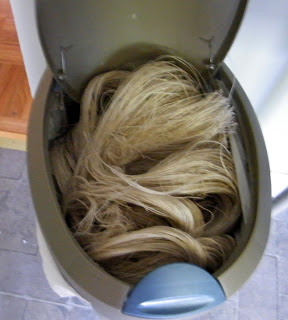 So from ‘golden hair’ to ‘gone in there’ what a blessed relief! Going to put something really, really slippery on now and know I added several hours to my life!
Posted by Lynnette at 3:28 PM

Good for you! I am not sure I would have been so brave, but I think you did the right thing.

Ouch! That was expensive. However, I understand completely.

Wondering if spraying the warp with spray starch or even hair spray would have helped with the sticking problem? Not sure if using a humidifier in the room would have helped either. All these are solutions I have read about to help weave sticky and hairy linen warps, haven't had the chance to see if they work or not. Of course this is even remotely helpful now, sorry. Scissors are always a weavers sanity saver. Enjoy your next warp, happy weaving - Martha

I briefly considered using some kind of sizing material to help deal with all of the problems. We currently have 37 degrees C with 5% humidity,so the weather was against me too; so I just gave in and cut! I was also looking around my studio and saw all three of my looms with hateful warps on them, so grabbing the scissors was pretty easy...

Oh yeah, been there and done that! It's worth just cutting it off. I wouldn't have the patience either to deal with an entire piece of sticky-ness :(

AAAAAYYYYYYYEEEEE! that final picture did me in!!!! I know the feeling but the entire warp in the trash.. painful but I'm sure the wave of relief was better. I hope your next warp will make you very happy.

Wow, I admire your style! I have a warp I need to cut off, have decided to cut off, and yet, it still sits on the loom. I'm taking a page from your book!