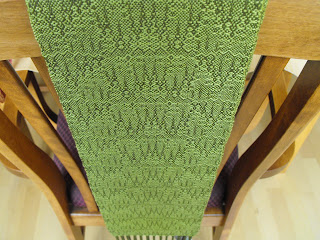 I really like the first project I did on the AVL. The green Crackle scarf with the tone on tone colour way really made the Crackle pattern pop. So I decided to do another scarf in the same pattern with 2/8 Tencel using Adobe for the warp and Sea Coral as the weft. 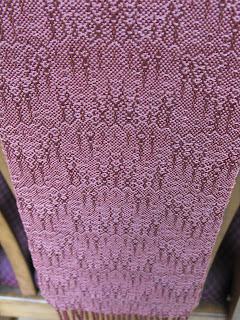 The above picture is quite purple but the scarf is more rosy in colour like the below picture. While I was weaving a way my loom made a horrible crunching sound and I wasn’t sure what happened. It turned out that one of the bars skipped; of course I didn’t figure it out until quite a bit later when I could see the mistake in the pattern. I haven’t quite figured out how to go backward yet, so I decided to weave a few more picks and then to fix the miss while still on the loom and under tension by needle weaving in the missing weft pick. 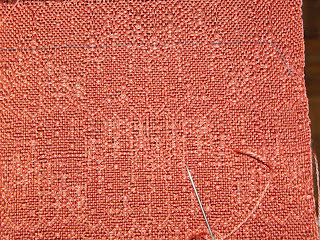 I used blue thread to follow the correct thread in the next pattern repeat. It really helped to keep track of the pattern pick that I needed to copy.

I finished the needle weaving and it was apparent right away that there had been a fix because of the density of the picks, it just looked crammed in there. I was hoping that washing the scarf would ease the picks apart, but it didn’t and so now the scarf is mine! I really love the pattern and the tone on tone is lovely, and who doesn’t need another scarf!

Here is a sneak peek at my next project; colourful doesn’t even begin to cover it! 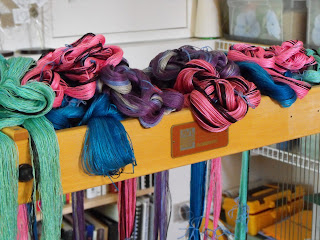 Hi there - I really like the effect of the two tone crackle scarves ! Must add crackle to my list of things to try. have loads of 2/8 tencel and your scarves look great in that yarn ! How patient to be able to add the missing weft thread !! Can't imagine what is coming next ??

Ah, pretty colour! I had much the same problem after needle weaving in a missing pic. It looks like you have tried to stuff something in unless you use a needle to shift threads around to ease it in. Who has time for that?

I have a personal collection of lovely seconds! I think most weavers do...

Love the pattern you're getting...especially the tone on tone. It's beautiful

Gorgeous, gorgeous and more gorgeous. I love the colors they all pop and shimmer.