The Colour Star by Johannes Itten can be a very useful tool to help you make magic by showing you what colours work together and which colour combinations make each colour shine in its own right.

The Colour Star comes in a fold over box which contains; an written overview of the stars  premise which is based on geometry, the star itself and nine black discs to isolate the colours and create what Itten calls chords.  Based on triangles, squares and rectangles, the Itten Star challenges our colour perceptions.  I have set out some cones of tencel as examples, please bear in mind that these colours are not necessarily ideal as they may not have the same colour saturation levels and are for demonstration only. 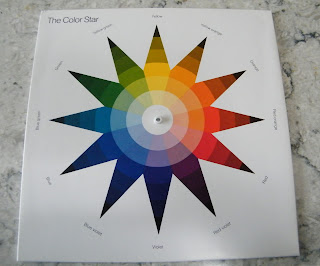 The first disc has two openings which isolate ‘the complementary’.  The complement of one colour on the wheel is the colour which lies directly opposite it on the colour wheel.  My example shows orange and blue. 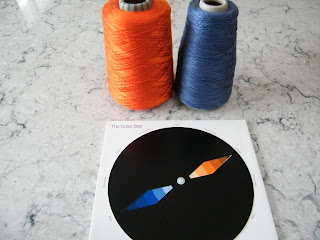 Next is a Triadic chord. This disc outlines an equilateral triangle; these colours will work well together harmoniously.  My example shows violet, green and orange. 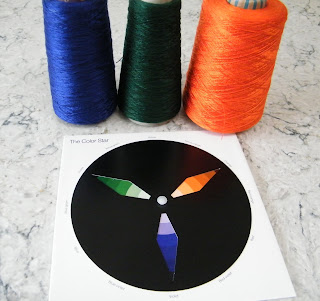 Another Triadic chord is the Split Complementary and this is the one I use most often when planning ‘Echo Weave’.  A split complement is made up of three colours, one basic and two colours which lie either side of its complement.  This colour combination almost always creates iridescence. My example shows  green, yellow and red/violet.  Red/violet is the base colour and green and yellow lie on each side of it's complement yellow/green (lime). 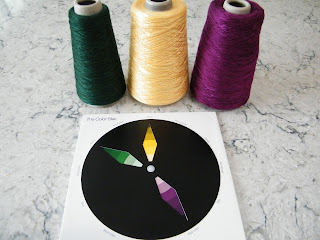 Next is a Quadratic chord, called the Tetrad which is based on two pairs of opposite colours.  The first opposites are yellow and violet, the second set is orange and blue/green. 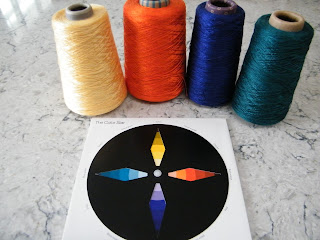 The second Quadratic chord shows a Tetrad of two complementary colour pairs based on a square. My example shows yellow/green, orange, red/violet and blue.  Red/violet is opposite yellow/green and orange is opposite blue. 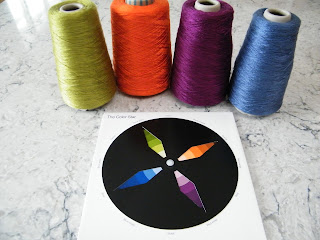 The final Quadratic chord was actually missing from my Itten Star, so I borrowed the disc from a friend and made a copy.  The four colours in the Tetrad are the four colours of a rectangle on the wheel.  My example shows blue, yellow, orange and violet. 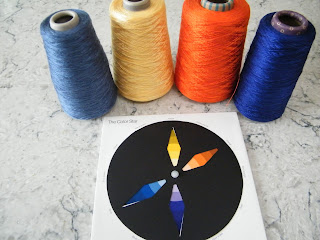 Now we are onto a Five Tone chord.  This disc shows a primary colour with its four split complements.  My example shows violet and blue/violet, orange, blue/green and green. 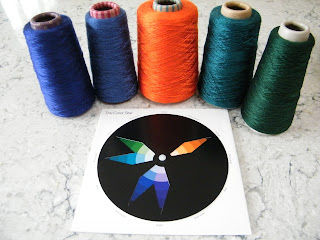 This next disc has six openings, but it still falls into the Triadic category.  This Triadic chord uses colours on opposite sides of the true Triad.  My example is green, yellow/green, orange, orange/red, violet and blue/violet. 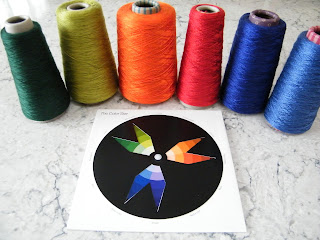 The final Dyadic disc is called a Six Tone chord.  This is a hexagon which incorporates 3 commentaries. I can’t quite wrap my head around this one as it just seems to be most colours put together.  My example is yellow, orange, red, violet, blue and green. 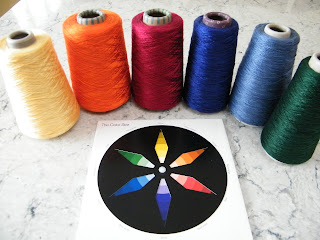 The Colour Star can be helpful to narrow down colours which will work well together.  The the ratio of how the colours are put together is a whole other story (and perhaps another blog post)!  I recall hearing one weaver say that if she uses blue in a warp she always puts a tiny hint of orange too, it just made the blue, bluer.  Funnily enough, she also stated that her least favourite colour was orange, but her stash featured heaps of orange!

My final shot is a lovely batch of strawberry/rhubarb jam we made this week to fill the house with memories of summer. 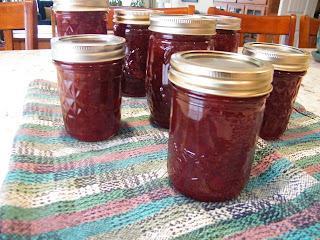 Question - you say a Split Complementary is the one you use most often when planning ‘Echo Weave’. Do you use the complement as weft and the other two as the alternating warp colours?

Hi Diane,
You can swap them around however to see fit. I have had success both with; for example, blue and green in the warp and yellow/orange weft and with green and yellow/orange in the warp with blue weft, it seems to work either way. Another good resource for this is M Stubenitsky's book Echo and Iris, it is well worth a read.