I finally have the Taco Tea Towels off the loom and washed and dried,  and I am really, really happy with them. 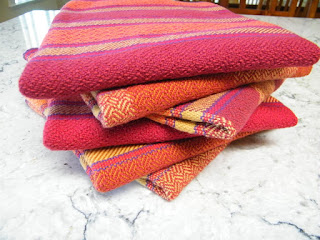 The first two tea towels were woven with wefts of framboise and orange brulee and I really liked them both.   You can see them here. 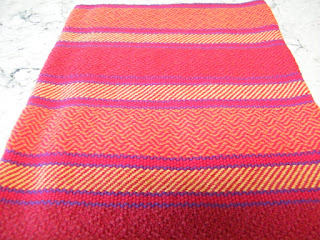 I decided not to weave any two tea towels the same, so for my third tea towel I chose cerise (cherry) for the weft.  This tea towel is by far the hottest and brightest of the lot.  It is much prettier than the photo because no matter where I put it, the sun mars the true colour. 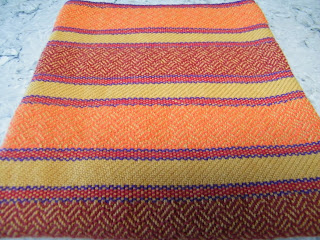 Tea towel number four was woven in honey yellow and I love the soft glow of this towel.  Because I used honey for one of the warp stripes too, the overall effect is much calmer than the others. 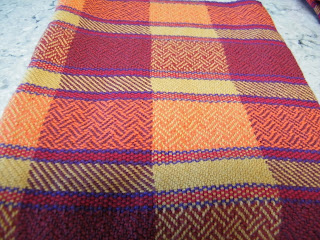 At this point I decided that I was going to change it up and do colour blocks.  For this tea towel I decided to go for about 3 inch blocks of honey and framboise.  I wove a 4 inch block to start and at the end so that I would have 1 inch to fold under for the hem.  This ensured that all the blocks on the ‘right’ side of the tea towel are all the same length.  I really like this tea towel but I must admit that all the stopping and starting whilst changing colours really slowed me down. 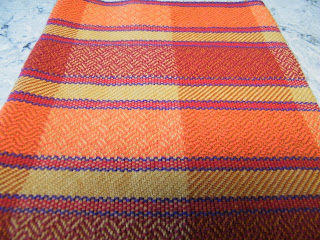 For the final tea towel I chose to continue weaving in blocks, but made each block 4 inches in width and wove 5 inch starting blocks.  By doing this I went from 12 blocks to 10 blocks.  This tea towel was woven in blocks of honey and orange brulee.

I really departed from my usual cool colours with this batch of tea towels, but now that the colour barrier has been crossed, I have a feeling more of the ‘warm’ colours are in my future! 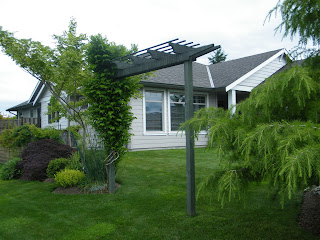 As I mentions some time ago we painted our house this spring and went from a soft green house to a soft soft grey.  Well, against the new grey our well weathered teak two seater placed on the side passage way looked really sad.  So, we threw caution to the wind and painted it purple.....yup....purple! 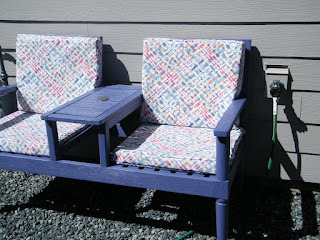 The old cushions were brown tropic themed and really looked weird with the purple, so they got a make over too and we chose to go bold and cheerful and I love it!  Gotta say, making covers for square cushions was a weebit of a challenge, but hopefully no one will inspect my corners!

The garden shot for the week is Clematis ‘Jackmanii’ peeking out from behind the much more aggressive grapes on the pergola in the back garden. 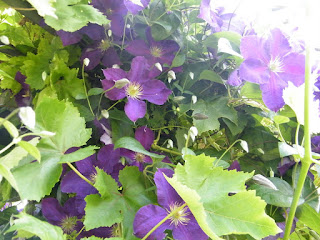