How does the garden grow

Not a lot of weaving has been going on, what with company and trying to bring some order to the gardens.  I thought that I would show you around the gardens.

First a stop is at the Veggie Pod, a waist high cold frame in which we keep kale, lettuce and start some seeds.  The lid keeps the sulphur white butterfly from the kale and slugs from the lettuce. 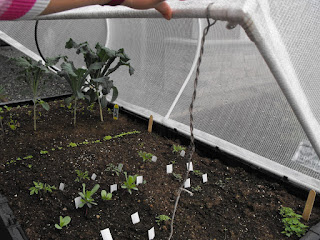 Next is the runway garden, so called because is quite narrow and runs the length of the driveway.  It is in the middle of a major revamp.  There used to be large fig trees at the top, but they were too near the house so they had to come out.  In the middle between the two sets of rhodos formerly held plums trees, but the ants and aphids made them awful.  So we were left with just some sages, Mexican feather grass and the rhodos.  Now the plan is to level the soil and take out all the extra soil, remove all the plants (re-homing what we can), leaving the rhodos and plant two new figs farther from the house, then put down crushed rocks over landscape fabric.  You can see the old fig roots that we are having a difficult time removing! 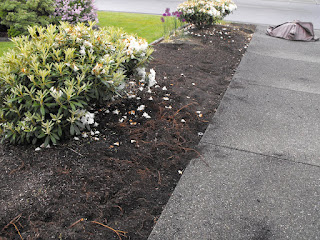 The front garden is really starting to take off.  The Siberian irises seem to have doubled since last year and are getting ready to bloom.  The early alliums are adding a bright burst of colour against the white spring blooming plants. 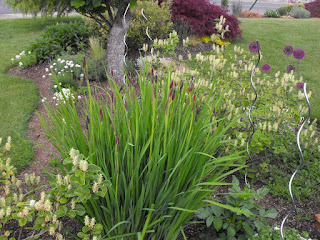 Last year we put in a pergola with the trumpet vine which is looking really healthy.  The Japanese maple called Orangeola is taking over the side garden. with abandon.  Two new hazelnut trees have been added along the fence and you can just see the flash of colour that is the 'Hot Shot' azaleas in the distance. 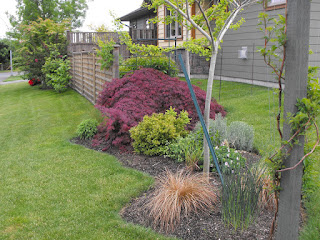 Around in the back garden there is a small green waterfall Japanese maple that we found as a seedling.  The green sedum is putting out a lovely show of tall airy spikes of white flowers; they seem to be taller this year for some reason.  There are hostas just at the edge of the frame along the garden shed. 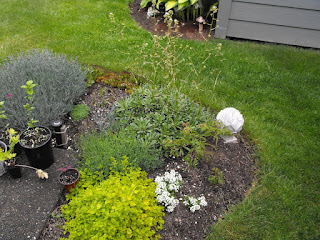 A little herb patch in the front of this bed that is about to be overwhelmed by the Gooseneck Loosestrife, I need to go and reign it in before it is too late, but I love the Goosneck in flower arrangements in the summer.  The back yard is always the last of the gardens to be wrangled into shape in the spring. 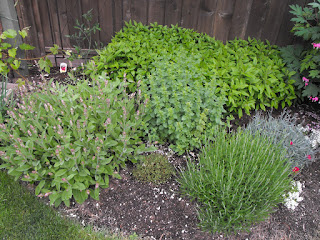 The other garden that is getting a revamp is the fernery in the north garden.  The back fence used to be covered in various ivy and there is still a little patch that needs to come out but it is very hard work to get ivy out once it is established.  We have added some bee balm but still have a few areas to add some more shade loving plants.  The little tree by the rhubarb is this springs stand out plant. 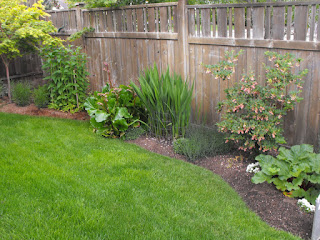 It is an enkianthus ‘red bells’.  The tree is just covered in pretty red striped flowers and the bees, bumble bees and the humming birds all love it! 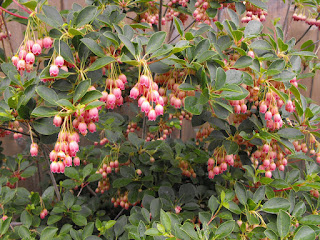