In the beginning of the year we are always drawn to tea towels.  This year I wanted to do lively coloured and thick stripes.  I was really drawn to the purples and a lovely lime green to highlight the colours. 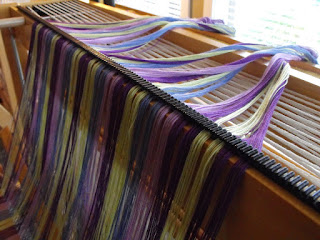 I found a charming pattern on Handweaving.net that forms little boxes.  The pattern is a 3/1 turned twill also known as a drall. 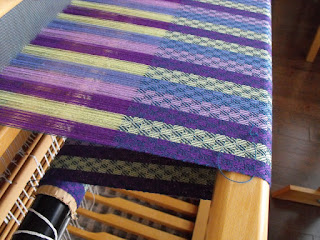 The stripes are an inch wide and there are three boxes per stripe which makes them look even wider.  The weft for the tea towels is a lovely shade of blue from Brassards called Denim. 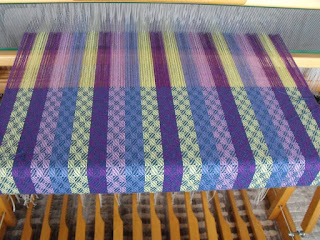 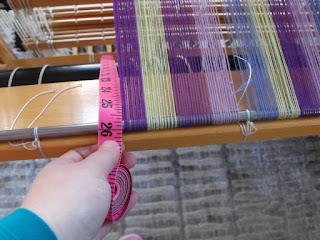 I came up with a great idea, bookmarks!  I tried out a couple of colours of 2/8 cotton but they were matte and boring. 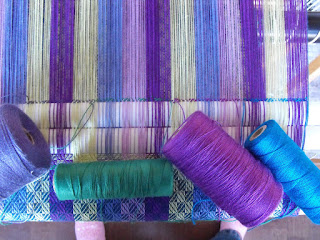 So I tried some 2/8 Tencel in black and two navies, they had shine and were exciting.  So I had found my weft for the bookmarks. 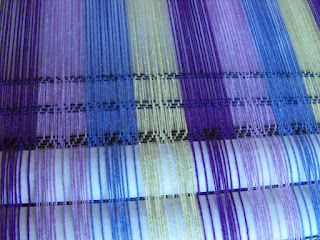 I decided to only use some of the stripes.  And here is where I made the mistake; I decided to cut out the warp stripes that I wasn’t going to use.  I don’t know what I was thinking.  The tension on the warp went wild and I had to finish cutting the entire warp off.  Here is the chained off warp looking sad, maybe I will do some temari balls with it. 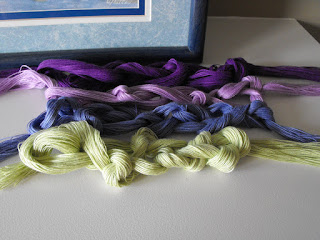 Here are the finished tea towels.  They look fresh and cheerful.  They remind me of the first spring flowers, crocuses.  For Sale. 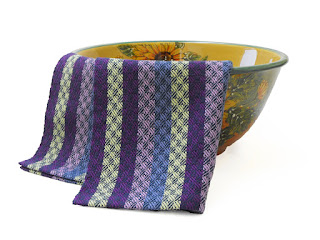 One thing about the tea towels is that the lime green stripe doesn’t look green anymore.  The purple stripes and navy weft has pulled the green colour from the stripe and now it looks yellow.  I still think that they look great, but not quite what I had intended. 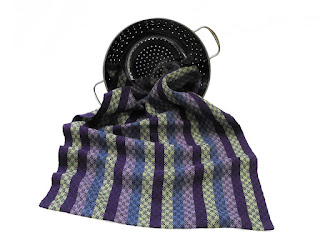 Final Garden Shot is Bleeding Heart.  I wish I had a crocus picture but a bunny dug the bulbs up and ate them! 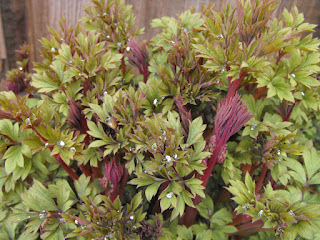 Your colors are awesome!
Great choice.

The pattern is not from Handwoven magazine, but from Handweaving.net which is a catalogue of historic and vintage patterns.

Very pretty towels despite the purple stealing the blue from the chartreuse.