I wanted to weave something different and remembered how much I liked weaving placemats. While flipping through an old Handwoven I saw a nifty draft for Huck placemats with three different treadlings. The placemats are made from 2/4 Cotton in teal for both warp and weft. 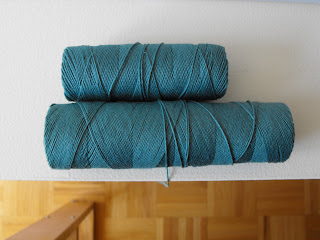 The thing with placemats is that it is hard to get them to be the same size so I am using the idea that my Mum had with the book marks. I am weaving two placemats at the same time. The draft is a 4 shaft Huck so the first warp is on shaft 1 through 4 and the second warp is on shaft 5 through 8. So two warps with 300 ends each, it made for a long time threading! 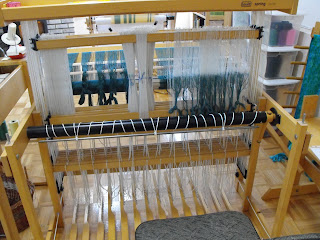 The placemats are 15” in the reed so I placed them as far apart as I could so the extra heddles had to go in the centre. I was able to get 5 inches between them, making room for me to manipulate the shuttles. 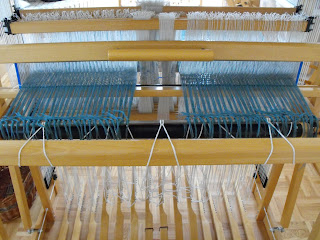 Actually weaving the placemats is pretty easy; the one thing that I have trouble with is the tension, I am used to using fine yarn grist and changing to such a thick grist meant that I had to re tension the loom. For the Louet Spring that means releasing or tightening the texslov cord that leads from the springs on the back of the castle to the floating front beam. 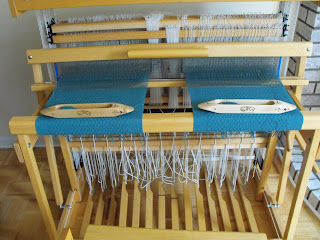 The first set of placemats has the huck blocks offset which produce diagonal lines. This one is my favorite of the three. The colour in the picture is true, a very pretty teal. 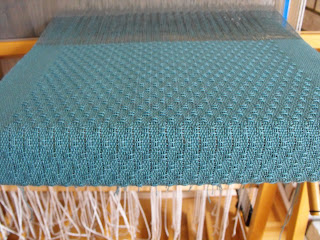 The second set of placemats has a pattern of huck blocks all over. They are very light and airy. 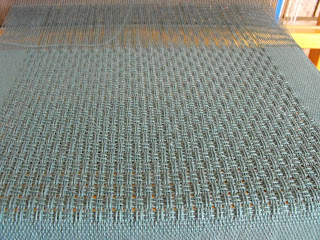 The third and final set has huck blocks and then the next row is the huck blocks up side down. 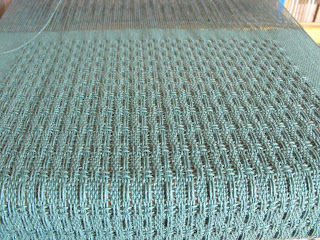 The interesting thing that I found was the sheds were different on the two placemats. The placemat that was on shafts 1 through 4 had a much larger shed then the placemat on shafts 5 through 8. I then realized that geometry had reared its ugly head. Because shafts 1 through 4 are so much closer to the fell line, the angle that is produced when the shafts are moved is more obtuse. But shafts 5 through 8 are much further away to the fell line so although the shafts move the same amount to angle is much more acute. In this case the shed was half an inch smaller. 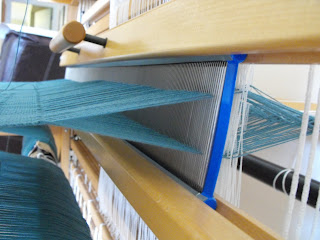 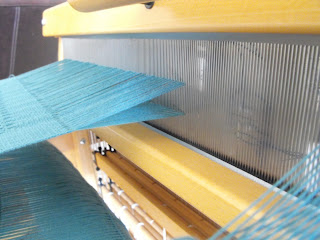 The size of the shed really impacted me at the end of the warp. I was able to weave with the normal shuttle on one placemat but the other one I had to change shuttle to a little tapestry shuttle so I could get the last couple of picks that I needed to finish the placemat. I also wove as far to the very end of the warp that I could! 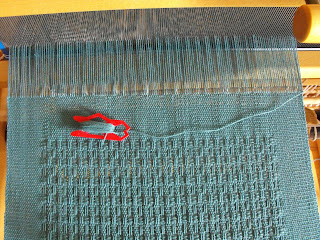 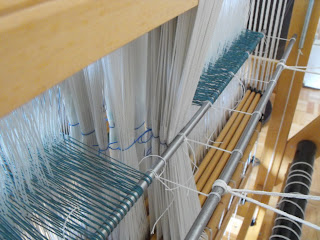 I didn’t like weaving these placemats because they were boring! So I finally got them off the loom and put them away in a drawer. I am going to have to get them out and wash them at some point but not today! 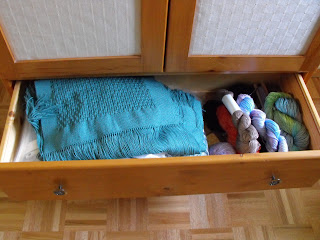 Great idea, two placemats at a time! No worse than the overshot I am stuck on!

I am a sewist, not a weaver. I wanted you to know that I find your blog a beautiful read. I love seeing your photos of fibers and your loom and at times they take my breath away. I always wanted to learn to weave but somehow have been guided down this sewing path, which I do adore as well. Just love your blog.

Hi there - funnily enough I have just wound a warp to do the very same placemats ! Hope they aren't going to be too boring !! Thick cotton will be a change for me also and I liked your tip about the tensioning on the spring, I need to remember that !
Lovely colour of cotton though !

Loved your experiment weaving two placemats at the same time. Think they are beautiful and I am looking forward to seeing them wet finished.

Thanks for an interesting post. Two placemats at a time were a great idea. Great photos of your work in progress.