After my cottolin test gamp was off the loom and it had past inspection, the gamp was neatly labled and pressed and put away in my Test Box. What to do with the remaining 3 or so yards of warp? At first I did some sampling on the loom, fooling around with treadlings, but I soon came to the conclusion that I was going to have to pull the threading and rethread. 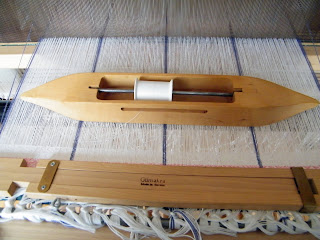 After a bout on PCW Fiberworks I decided that I liked the look of both the Rosepath and the M's &W’s, so I created this draft. Very busy looking in the draft, but since the runner will be around 50" long it won't be quite as busy as the draft shows. 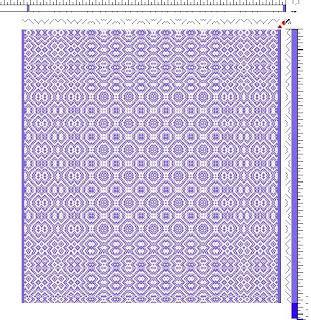 I put a M&W’s threading block on each selvedge and a double Rosepath block in the centre. I decided to weave a deep border of 10” of M&W as drawn in and then follow with about 48” of Rosepath as drawn in. The overall effect is a bit busy, but I like it. There are a lot of long floats, but they give the Rosepath the rounded look, so they will stay. Since my warp is set at 24 epi, they aren’t too long for a piece destined to be table ware. 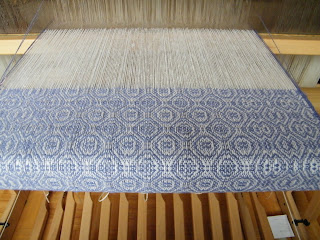 The first thing I did though was drop the lilac separating stripes, there was no way I could work them into the design and like it. This made narrowing the draft from 17-1/2” to 16-1/2”, but that still worked for me. 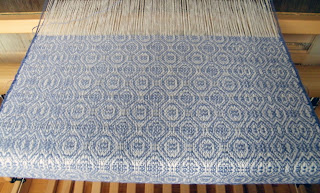 I decided to keep the lilac threads on the selvedges and added a floating selvedge to make the edges neater. 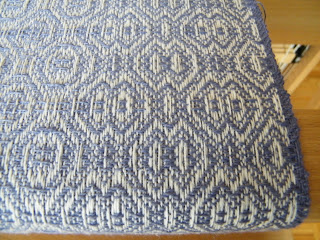 Here is a closer look at the M&W’s border. 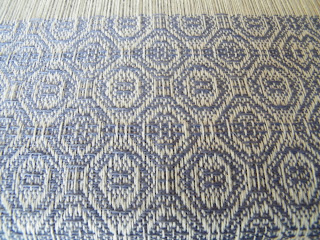 And of the Rosepath center block.

Rep Weave and Beyond by Joanne Tallarovic is a beautifully crafted book clearly documenting how the author modifies traditional Swedish ripsmatta to create her own contemporary patterns. There are 29 well documented design projects including table linens, rugs and wall hangings. The projects are accompanied by step-by-step instructions and great colour photography. There is a nice section on finishing and care of your rep weave creations. I really recommend this book as it is lovely for any weaver to browse through and a great inspiration source.
Posted by Lynnette at 3:22 PM

Your gamp/runner is stunning! The two weave structures blend so nicely.

The colours look fresh and crisp too!

I hope to be back playing with weaving soon ...

Its beautiful. Your weaving always inspires

I love it - it looks soft, gentle and old-fashioned. I can't wait to see it finished.

Glad to see that you could make such good use of the end of your warp. (Plus, it will make me braver in the future about making changes midway through and re-sleying when needed!!)

It's great that you could get both a gamp and now a beautiful runner out of the same threading!!

Your runner looks great, the draft is really beautiful!

I like the way the blue and white together give a silvery look, it's beautiful.