Instead of weaving just one more woven shibori scarf, I decided to weave two! These scarves are so rewarding to weave that I plan to weave more, I love them! These scarves are the same pattern as the first one I did but they have been dyed using a different method, so these two scarves have a totally different look. I pulled the pattern threads very tightly on these scarves; I was amazed at how tight I could get them.

I used Procion MX dye to paint the scarves; unlike the first scarf which was dyed by using an immersion dye bath method with Procion MX. These scarves were soaked in a soda ash bath then painted with a sponge brush with concentrated dye mix. 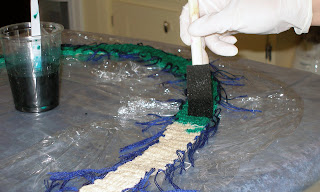 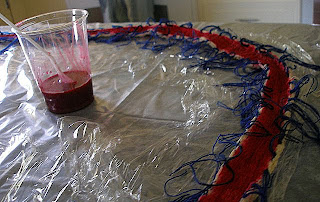 The scarf was then wrapped in cling film, don’t they look like palmiers, you know the little cookies? Then the scarf is set aside for 24 hours before rinsing. 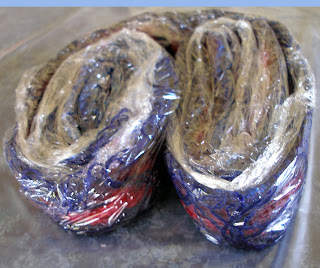 The first scarf was dyed jade green on one side and royal blue on the other. The effect I was looking for was green mountains and blue valley lakes, similar to the area that I live in. 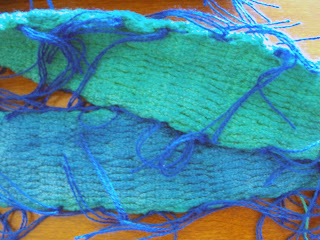 The second scarf was dyed fushia pink in the centre and royal blue on the edges, the same on both sides. The mixing of the two colours made for a dark purple secondary line. 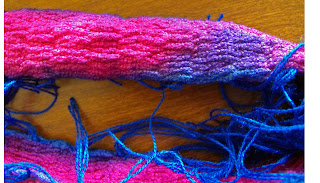 The green and blue scarf is very cool looking; I think it came out as is a lake effect instead of the valley look that was the starting idea. We live near one of the top five most beautiful lakes in the world according to NatGeo, Kalamalka Lake, which means lake of many colours. Kal Lake is a marl lake which means that there is a concentration of calcium carbonate which crystallizes when the lake warms. The crystals reflect the sun creating the beautiful jade colours in the lake. This scarf is a wonderful representation of the lake and totally unintentional! 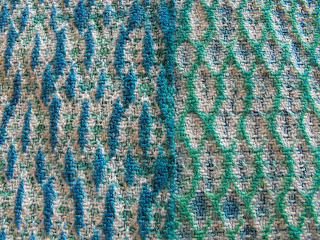 Because of the painting process there is more white showing than with immersion dyeing, the dye stayed more on the top of the peaks and also is more concentrated in colour. Here is a close up of the pink and blue scarf. 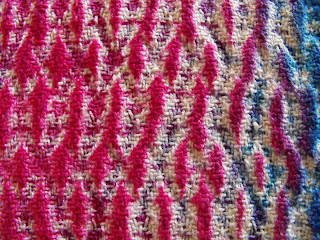 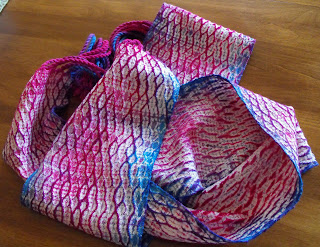 The pink and blue scarf is bright and cheerful and totally different from the very first scarf which was dyed the same fuchsia colour. 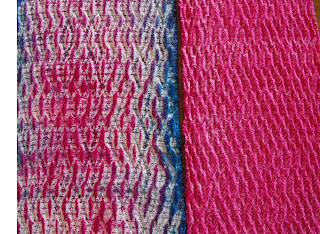 The other difference from my very first scarf was that I ironed these scarves flat, OK Mum did! I was threading my loom with my next project when she called me over to look at the scarves after she ironed them. She was quite taken with the green/blue one so that has become hers. I am very tickled that she wants to wear my scarf, and I can’t think of a better compliment from a weaver, mentor, and a mother, can you?! 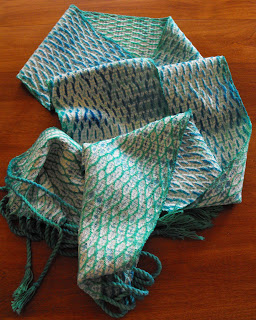 Ngeire, they are gorgeous! I want to try one too..............but I have to work 6 days this week and that will be fun too. I don't suppose I can make them as beautiful as yours are but I think I wil have the same fun as you did. And your mum, she the greatest, wearing your scarf. It really is a compliment.

They turned out wonderful! Kind of exciting playing with the dyes isn't it?

You know how persnickety your mother is, so if she's wanting to wear one, that's some compliment!

I'm looking forward to seeing them in person soon...

These scarves are incredibly beautiful! Dyeing always has a surprise element but the shibori adds another exciting twist!

your scarves are beautiful!!! You're making me want to add doing more shibori scarves to my very long to-do list.....not to mention adding the lake to a place I'd love to visit in the future.

The lake does look beautiful (according to Google!)

Those are gorgeous scarves! And I appreciate seeing how you dyed them. I have a dye project I want to do before the snow flies....but I'm unmotivated. I hope seeing your project helps me get more motivated!

Definite compliment to have another weaver want to wear your work!!! Congrats on a great project!

Nope, and I can see why she is excited by your results. Playing with dye is dicey, scary, fun, exciting and a crap shoot. You won!!!!

Your scarves are very beautiful! I really like that you dyed them two different colors :o)

Wow, what a cool process and the end result is absolutely beautiful!

Kalamalka is amazing, I miss it. it's really hard to describe to people who haven't seen it- but it truly is one of the world's most beautiful lakes.

They are beautiful. i am just learning how to weave now on my loom. I got a sweet deal for a 40" gilmore 4-harness loom and it came with the bench and more accessories than you can shake a stick at lol. Plus tons of books and old issues of Handwoven! Thanks for sharing I think I will get a book on Shibori.

My brother recommended I might like this blog.
He was entirely right. This post truly made my day.
You cann't imagine just how much time I had spent for this info!