I’ve finished weaving my shibori scarf; here it is looking lovely with the blue pattern threads in a diamond pattern. The scarf was 7 ¼ inches wide before the gathering. 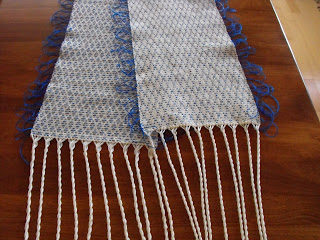 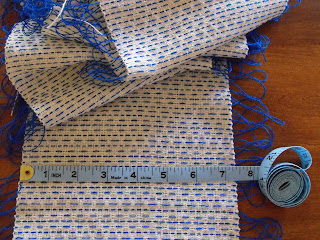 On one side of the scarf the Shibori or pattern threads were gathered in small groups in an overhand knot. The scarf was compressed against the overhand knots as tightly as possible. I was able to get the scarf down to 1 ¼ inches. 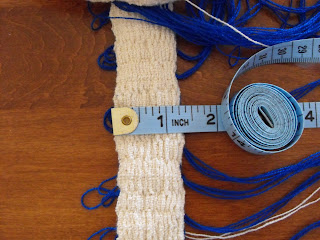 Dyeing was scary because I had no clear idea of what I was doing or what the finished product was going to look like. I chose to do an immersion bath with Procion MX dye in fuchsia. It took about an hour to dye, and I was worried that the scarf would just be hot pink and not show the diamonds I was planning on. It was really hard to wait for it to dry. OK, I peeked and it did nothing to alleviate my worries. 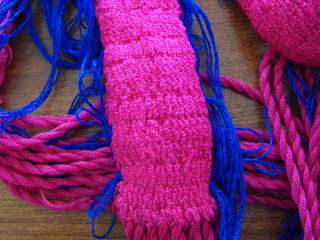 But after carefully cutting the knots and pulling the blue threads out, I pulled the scarf apart and . . . it is amazing! There is different saturation of the dye and it is really cool! 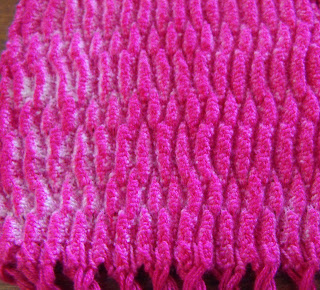 Instead of ironing the scarf flat I chose to block the scarf to 5 ½ inches and to allow texture. You can really see the variations now. You can also see the holes from the Shibori threads. 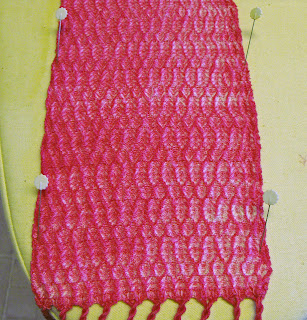 The scarf has a light and lovely drape. By blocking the scarf there is still a good amount of texture from the gathering process. 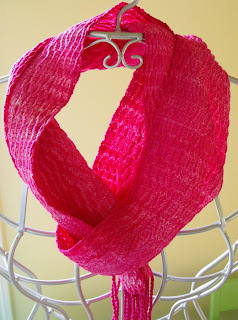 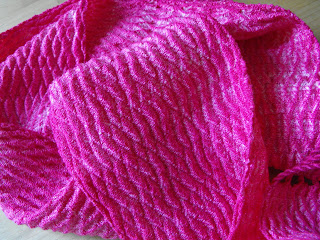 There are two very different sides to the scarf. One side is valleys and the other side is peaks of diamonds. The scarf is very touchable; everyone who sees it must touch! 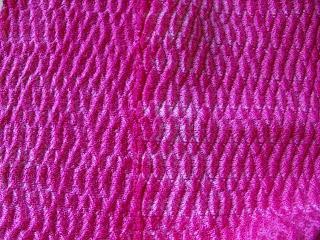 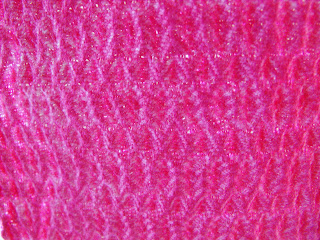 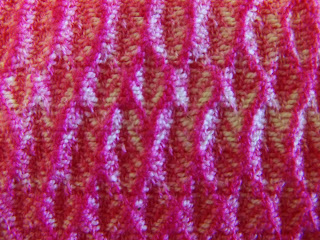 I have enjoyed the entire process of making this scarf, the two shuttle weave, the gathering of the scarf, the nail biting (for me) dyeing process and the remarkable reveal of the scarf. I have enjoyed it so much, that before the scarf had dried I had dressed my loom with another one! The next one may be dyed in a different manner, maybe two different colours, one for each side.
Posted by Ngaire at 8:03 PM

Your scarf turned out beautiful! It has been very interresting to follow the whole process - now I know what Shibori is!

Very pretty! It looks like a lot of fun. I've been perusing the Woven Shibori book recently myself.
So much fun to be had with the technique!

This shibori scarf turned outmuch prettier than other examples I have seen-thanks so much for the great tutorial about this!

The scarf came out great!!! I like the idea of two different colors of dye - one on each side....or even on the same side. Of course, when I get my hands on dye, sometimes I go wild and end up with something pretty, but that I don't end up wearing - so maybe it's not good to take my advice!!

Your example of woven Shibori is really cool! I love that it retained texture!!

This scarf is beautiful!

I did a few woven shibori projects a while ago. I can't wait for a break in my production schedule so I can do more.

Ah, you managed to get the best of both... colour *and* texture and I'm not surprized to hear that people want to touch it...my screen felt a bit flat :)

I wouldn't have been able to not peek either...

Looking forward to the next one!

BEAUTIFUL! I love the color and how the fabric retained the pattern.

Thanks for sharing this with us and your wonderful tutorial.

Looking forward to see the next scarf.

What a great piece!

This is very exciting. I completely identify with your apprehension, curiosity and then delight. This is what I am finding and I am still at basic natural dyeing leval!!!! Looking forward to your next creation.

Wow, that is gorgeous, I love the punch of color and then the subtle white in the crevases, just lovely.

Inspiring! Thank you for the indepth posting. Evelyn

I always feel like I'm jumping off a cliff them I dye, but when it something that's already been woven - that's a big enormous cliff. I think you landed splendidly well.