Modifications to a Leclerc Minerva

I have done a little renovation on the Minerva; here is a picture of what was taken off . . . 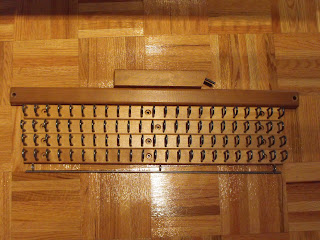 Now a picture of the new and improved Minerva . . . 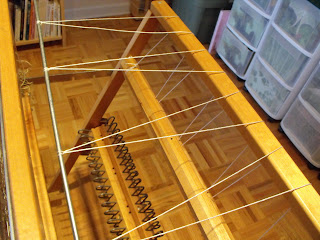 The sectional parts from the first back beam and the second back bar were taken off, because I have been having tension problems. The problem came from when each one inch section was wound; it was wound at a different tension. So I have changed to the same style of back beam as my Mum’s Louet Spring.

Also I am using the same warping method as her. An old raddle was found and I spent a morning sanding off the burrs. The raddle was then tied to the castle of the little Minerva. As you can see it came from a larger loom but it worked! 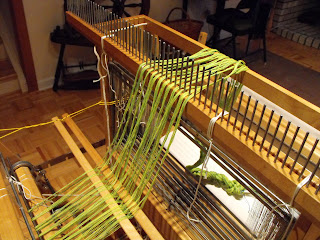 This was the loom waste, it was for the entire scarf, ok, I had a little bit more from the trimming of the fringe but it was just a little bit more. My last project, the blue Finnish lace runner, the loom waste was huge and shameful. For this alone the renovation was worth it but there is more good stuff to come! 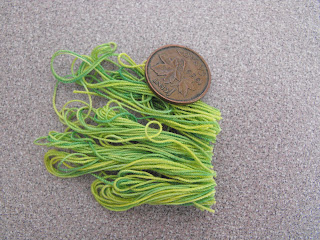 For my project I chose to do Bead Leno again. I went with perled mercerized cotton that was hand dyed with lime green and yellow. It was a little elastic and that made for a strange effect as I was weaving. Some of the twists relaxed and flattened out, I had no idea what the finished scarf would look like. 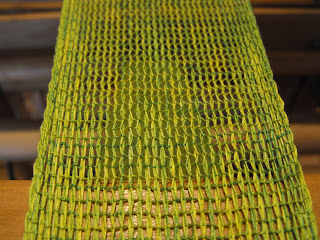 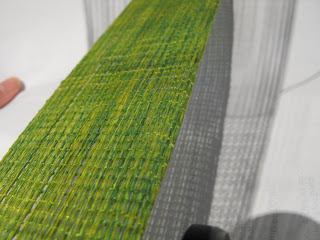 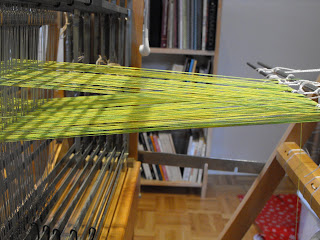 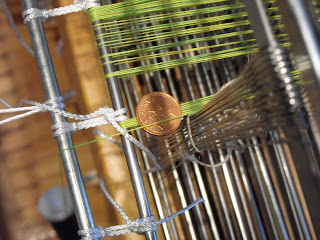 The new weaving skill that I learned with this project was hem stitching. I really like the finish. Hopefully I will remember how to hem stitch for the next project! 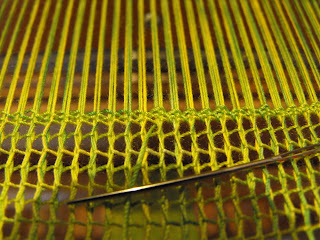 After washing the scarf the sticky fringe made lovely long corkscrews so I had to do a fringe finish that would keep the threads seperated. Four threads knotted at one inch with two green seed beads. 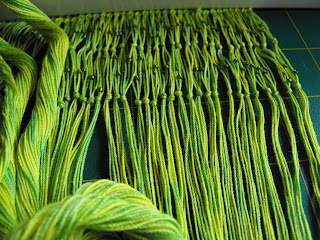 The finished project was a total surprise, the scarf looks totally different from my other Bead Leno scarves. Parts of the warp collapsed and others over twisted which makes for a very interesting texture. 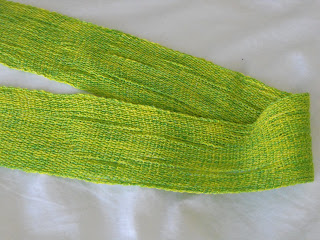 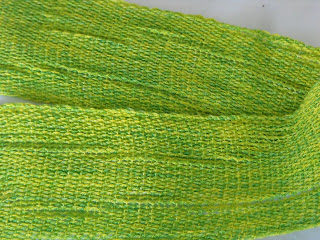 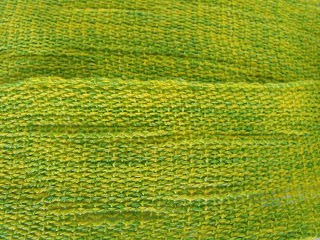 I made a necklace scarf! 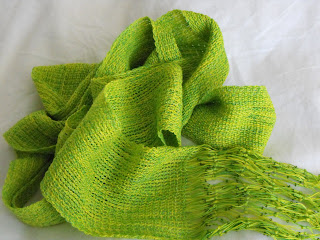 Lovely, and the color is pure springtime!

How fearless you are! Love the green scarf-a woven, jeweled beauty!

Beautiful!!!! I love the color. You said the yarn was hand dyed did you do it? Mind if I ask how long the fringe is? From the angle the picture was taken it looks long. As many times as I've hem stitched on the loom I still keep a handy drawing of it next to my loom.

Yup, had a Procion MX dye day with my Mum. Started with five ecru balls, three were dyed yellow and red and two were green and yellow.

The fringe is five inches long on each side. I wanted to do more and make it seven, but each row took me an hour! I also ran out of time because I wanted to take it to the guild meeting.

Great photographs. And an interesting look at your approach to this loom. It looks as though it will be a joy to weave on.

Love the scarf! What a great color and a beautiful job on the fringe and beading. How do you like your Minerva? Don't see them too often and they look like a wonderful loom.

Ngaire, That is just beautiful! I love the surprising texture, and the color is just so happy. Lovely work. And I'm jealous of your shed.
Kimmen

Love your scarf. A friend is planning to dye wool for a project and the description of the colour she's hoping to get sounds like the green you have here. I'm sure she'll stop by to take a look and be inspired.

This looks so great! The texture is really special and I just love this bright green color.

*LOVE* the color! What a lovely project! Really gorgeous... Love the airy-ness of the bead leno...

Can you explain how you altered your loom to get that terrific shed in the back. I'd love to reduce my loom waste like you did but don't have a clue what you did. I am really impressed by your ingenuity.

Wow - I aspire to loom waste like that! I definitely have more....maybe I get lazy or bored at the end of warps?

The fringe finish that you did is really pretty!

I'm surprised at how much the scarf tightened up off the loom. It is a great color though! I just bought a shirt that would go perfectly with it!!! (No, this is not a hint!)

Congrats on another great project!