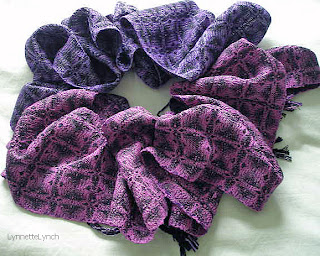 Both silk scarves are washed, pressed and put away. I’ve really reached my New Year goal of finishing my projects. You can colour me pleased in purple! 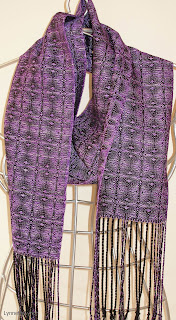 The Magenta Raw Silk is 70 inches long plus fringe.

When I pulled the black Tencel warp for these scarves I replaced the final 6 threads on each selvedge in purple Tencel. My plan was always to use purple silk weft on the scarves and the reason for the purple selvedge threads was to minimize the weft turns. I really think it works, even though the colour difference was too subtle for my poor camera to show in the weaving, it does show in the fringe.

After weaving the scarves I ended up with two purple scarves with black fringes, pretty but; I find the change between fringe and weaving to be abrupt. My solution was to introduce weft threads into the fringe before I twizzled. 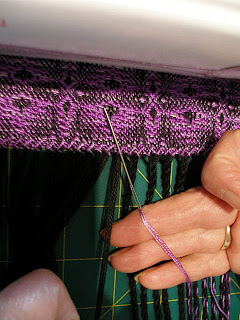 I thread a needle with a piece of weft that was twice as long as the fringe. Insert the needle up catching the hem stitching. 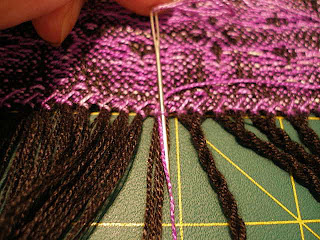 Then back down under the hem stitching to lock the thread in. 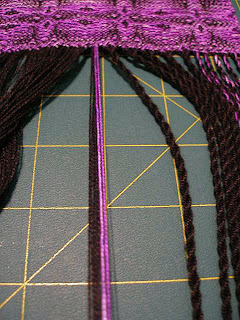 Pull until the weft thread is even with the bottom of the existing fringe. 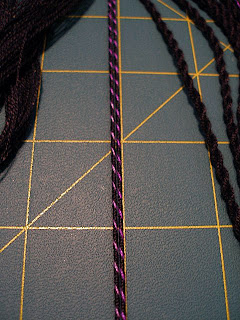 Now twizzle as usual; I think that the beaded effect is really lovely and it makes the fringe more united with the scarf as a whole. 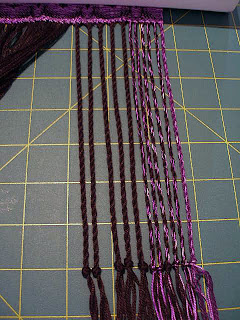 I also try and make the fringe a point of interest, so in this case I twizzled the bouts with the introduced weft threads singly, but twizzled the solid black bouts doubled, so now I have a thick and thin fringe on the purple scarf below. The photo below is before I've trimmed the fringe or pressed, so believe me it did improve! 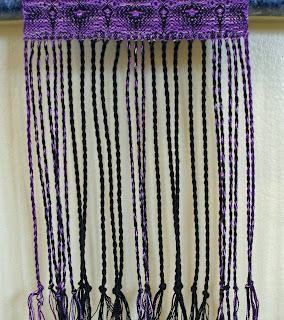 On the raw silk magenta scarf I did groupings of 3 coloured, 5 black repeated along the fringe with no doubling of bouts, so although the scarves are essentially the same, they look very different.

Weaving Words
Greek myth tells of the Moirae or Three Fates, a trinity of weaving sisters who determined the fate of each individual. Clotho – the spinner who spins the tread of life. Lachesis – the measurer who measures out the life span. Atropos – the cutter who brings an end to the thread of life.
Posted by Lynnette at 11:25 AM

The scarves look great! And congratulations on finishing another project!!!! (I was just contemplating the wisdom or lack thereof of finishing two projects I worked on today.....Finishing is important!)

Good idea about the fringe! I like it better with some of the weft color added!

Your are such an inspiration. Finishing projects is my down fall.

One of the best fringe treatments I've seen in a long time. Adding the weft color in the fringe adds so much to the already beautiful scarves.

I'm with Barb, especially the second paragraph. A beautiful example of limitations leading to creative solutions with results that could have happened no other way. Congratulations!

The scarf is lovely. Bartenders are the only other people to use the word twizzle, besides weavers.

I see you have the book, The Magic of Double Weave in your library. I'm interested in trying double weave and have been reading about it in Sharon Alderman's book. (I'm isolated so have to learn from books.) What's your take on this book. Is it a must have or should I just jump in and experiment?

Just lovely. I too am not a great finisher and am always awed and amazed at such beautiful work.

You are too cool! You really have wonderful finishing techniques.....ever think of writing a book?;) The scarves are lovely!

Such lovely scarves, beautiful colors and the patterns are so, well, dynamic! Isn't it nice to finish another UFO? I have a few myself!

Such a lovely scarf - beautiful colours!

I do admire the work you wavers are doing and all the patience you find to go on and go on!

It was interesting to visit your blog -
best regards from me, far up North.

I will certainly file your fringe-amending method away for future use. The scarves are delightful! The pattern really pops out at a distance too.