Oh crap……the tencel scarf I had such high expectations for, is not so good.

I learned a huge amount while weaving and then reweaving this scarf. The first thing is that on a weave structure like undulating twill, which has long floats, a pure tencel warp and weft can be very slippery. If I even touched the weaving it left a mark and the weft was almost constantly in motion, didn't set in place at all! Beat was of huge importance and when I first started the project, I wove about 12 inches and left the loom, when I came back to weave there was a very noticeable mark on the fell of the cloth and no matter how I fiddled I couldn't lose it. I un wove all I had done and started again. This time I removed the purple floating selvedge threads as they tended to be pulled under into the curl that was forming and looked weird. I replaced it with red floating selvedge threads which blended with the inevitable curl better. This time when I started weaving I made sure that I had a block of time to weave the 29-1/2” run before I stopped, to ensure that I had no break marks. Then 19” of alternating blocks, then another long run of 29-1/2”.

I used 2/8 tencel from two different suppliers: The Yarns Plus in Ontario and Maurice Brassard et fils in Quebec. Although both are 2/8 tencel yarns they are very different in appearance and structure.

The Yarns Plus tencel is very shiny and smooth and has 10 twists per inch and feels really slippery. 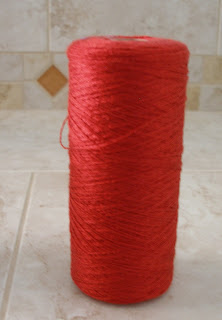 The Maurice Brassard tencel is not quite as shiny and seems a tiny bit thinner with 18 twists per inch and feels a little rougher. 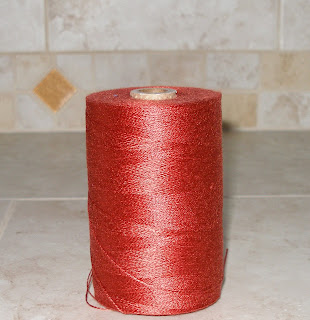 Seems to me that the Brassard tencel didn’t move around as much. Sorry about the bathroom photos, but it was the best light in the house today.

I knew right away that this scarf was going to have some physical undulations, I just had no idea how much…there was a very pronounce tunnel effect when it came off of the loom, which wet finishing calmed down a bit. The edges of the scarf in the straight run areas wanted to curl very badly as you can see as it’s drying. The straight run area took in more width wise than the checkerboard area. Took this photo in the bathroom while the scarf dries on the shower screen and you can see the way the weft moved while I wet finished. I decided to press the selvedge flat and to leave the centre alone. This caused some problems with the weft moving yet again…this was a bit unexpected because I thought that the washing and drying would have locked the weft in place! Yeah, no! 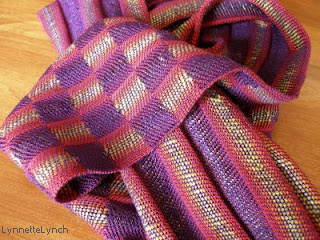 Don’t get me wrong, it’s a very pretty scarf, but with the weft moving all over the place unpredictably, it’s gonna have to live with me, because I’m the only person who will constantly push the weft floats back in place with a blunt needle, Oh Joy! 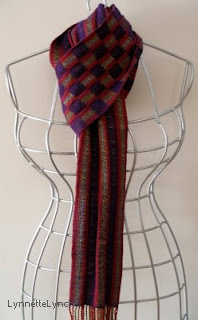 There is another scarf on the loom with the same red, orange, gold, silver and lemongrass warp, this time I will use a weft that isn’t such a strong contrast, probably the mid red, and I will weave the scarf in the checkerboard pattern to minimize the selvedge curl and the movement of the weft. I will switch from the Yarns Plus tencel to the Brassards tencel for the weft also. Would I weave this pattern again, definitely YES, but I would choose a different warp/weft combination, a yarn that’s not quite so slippery. 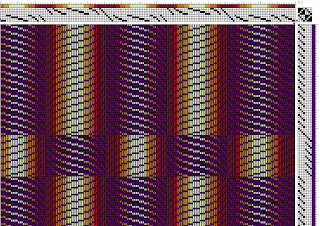 Oh, I feel your pain!!! It's so hard when your work yields an unpleasant surprise. When that happens to me, I really have to struggle to stay productive and keep going. (I have the strong tendency to let project setbacks lead to protracted breaks from doing anything creative.)

One of my weaving buddies usually has a phase of her creative process that involves hating the woven cloth. Stashing it in the closet for months to "ferment". Yet somehow she takes it out and turns it into something beautiful and award-winning.

From here, it looks like a really cool scarf!! I admire how you sound so ready to get back to the loom!! Weave on!!

I love the color combinations and am so sorry to hear that it gave you so much trouble. I can't wait to see how the next one turns out...and by the way, the finished product looks great anyway;)

It looks beautiful Lynette - I hope the changes you're making in yarn and design for the next one help things along. I totally failed to get a consistent beat on my recent undulating twill project.

Slippery yarns are not a good choice for undulating warps (or wefts). But you have already discovered that for yourself! I like your comparison of the two tencels. I had never thought of doing this kind of comparison between the same yarns made by two different manufacturers. What a good idea!

Oh, it's so beautiful, it's a shame that the yarn has given you so much grief... :(
Yikes, there's so much to learn!

I'm just reading about twills in Chandler's Learning to Weave, and at the top of page 133 it talks about selvedges curling toward the weft-predominant side. I thought you might want to check it out and see if that's one of the things you've got going on in this scarf.

(Hopefully you have the book - if not, this comment isn't so useful!)

It's a lovely scarf! Great colors. I've never woven with tencel, so I was very interested in your comments about it.