I am finished weaving the Bead Leno scarf! It was fantastic, I was so excited that I didn’t want to stop weaving after the first couple of hours but I had to as the light was getting bad. I was finished by the second session and very proud of myself. All in all the weaving only took about 5 hours.

Before weaving I added a hanging selvedge to help with my edges. As the 2/20 tencel is so fine a hint my Mum offered was to use sewing bobbins to wind the yarn around to keep it from tangling, which worked like a dream. With 6 pennies inside the film canister, which are like gold nowadays because of the digital camera revolution, a perfectly tensioned selvedge was produced. 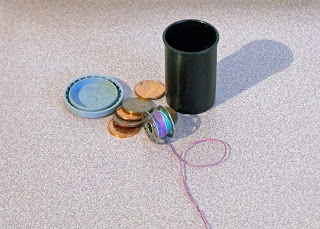 After I tied onto the front beam, I had tails of about 5 inches from the knots and as I had allowed for a ten inch fringe I need to ‘save’ some of the warp by weaving in the four Venetian blinds. The brown wool that is packed in next is acting as hem stitching, so that when I take the weaving off the loom it will not unravel before I have a chance to twizzle the fringe. 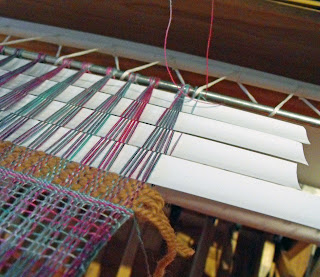 While weaving Bead Leno the twist made in the warp threads is quite noticeable. But when looking at the beads themselves during the weaving action there is no discernable twist. 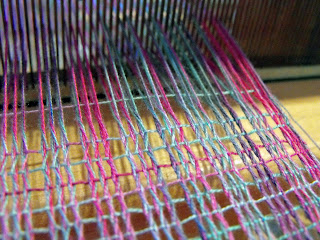 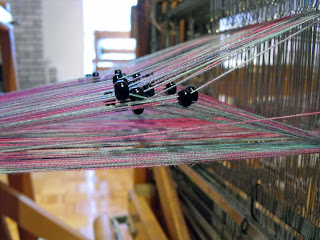 Weaving Bead Leno was absolutely bliss. I was only working with two treadles so I always knew where I was in the pattern. But the best bit was that every single time I passed the shuttle under the shed I could see the pattern, so as long as I was paying attention I could see if the pass was correct before I had to beat it in. It was a great bonus because I could pay more attention to how I was sitting and to where I was grabbing the beater bar; I have a bit of a bad habit of grabbing the sides of the beater not the middle. By the time that I had finished the scarf, I was a lot better if not cured. 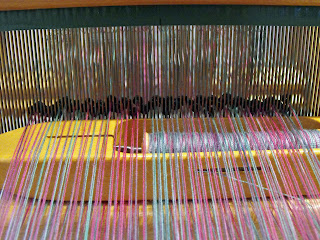 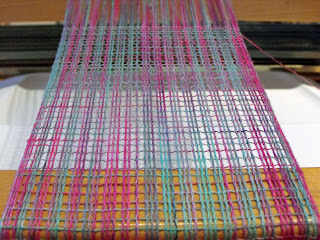 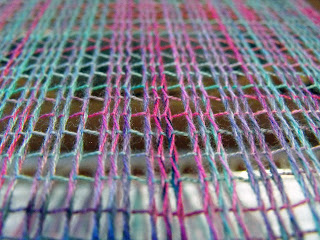 As I was getting close to finishing weaving my scarf I was getting more and more excited to see the finished product. But as I was advancing the warp for what I thought was the second to last time, I ran into a little problem. My warp extenders were too short, I had this problem with my last scarf and had made new extenders but I must have mixed the new and the old ones together and well . . . I had to unweave a little bit so I could finish the scarf by putting in the little bit of tabby and the brown wool. I have now made sure that I will not have this problem again but in the photo you can sure see the difference in length between the extenders! 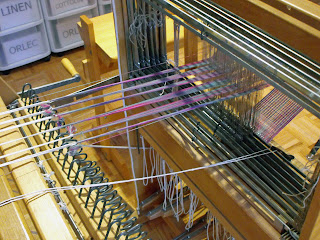 Finishing the scarf only involved twizzling the fringe. To do that I had to cut away the brown wool in sections and using the nifty twizzler twizzle away. 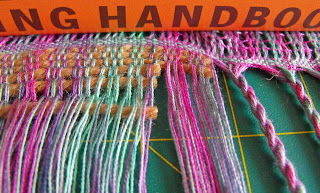 Here are some photos of my finished scarf 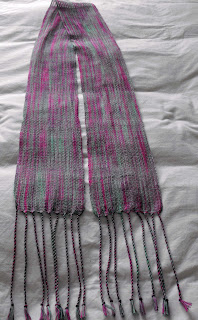 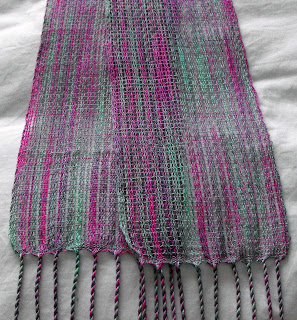 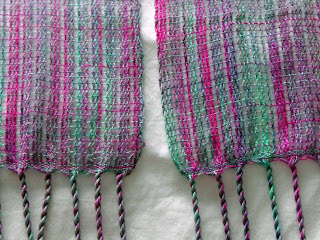 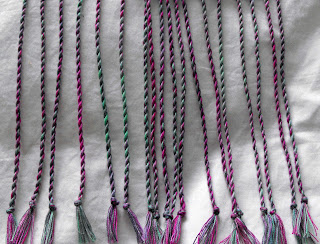 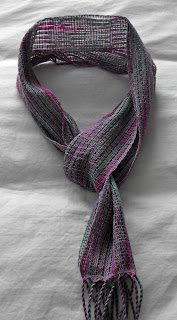 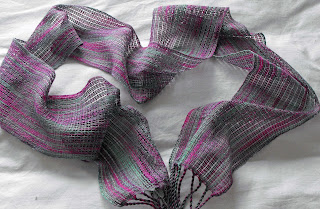 That is simply stunning. I would love to know more how you did that. I don't understand how the beads work to twist the warp threads.

Your photos are wonderful and you do me proud, daughter! You've really highlighted my painted tencel yarn beautifully....

Wow, that is gorgeous! What a delicate pattern - the weave, the colors - everything works together beautifully! Congratulations! I hope I can make such beautiful things someday...

This looks such fun, and your finished scarf is gallery-worthy. I'm definitely going to have to get a book about this technique.

Your scarf looks so airy and light!
It looks like a fun weave to try and you have me thinking bead leno now! Can you do it on 8 shafts too?

It really is beautiful!! Congrats!

I think I need a video to picture how it really works....and google didn't turn up anything online to help with that!

I did find this blog posting on Bead Leno which does say you can do bead leno on 8 shafts.

Cool technique, and love the scarf!!

Would love for you to email me about your bead leno work, if you have time. Lydia in Texas kendrick4343@gmail.com

Love your scarf! I just had a workshop on lace and it included bead Leno - so easy and fun to weave! I still need to figure out the way to warp loom with beads.
Thank you for sharing your work!