I received another parcel today, so that makes seven of the ten I’m expecting. I’m the coordinator for the Guild of Canadian Weavers yearly weaving exchange and it is great fun to receive all the submissions, best part of the job! The idea of the exchange this year was to send hand towels and receive different ones in return. There were few restrictions on the towels, just roughly 12”x16”, any pattern, any natural fibre and how ever many you wanted to send. The exchange was open to anyone with a membership in the Guild.

My hand towels were the final project - my swan song on my 12 Shaft Scandinavian Countermarche loom (it now lives in Anchorage Alaska). A beautiful but very large loom! 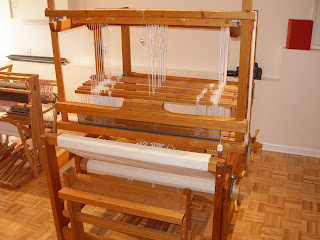 I wove 7 hand towels using patterns from Foot Treadle Loom Weaving by Edward Worst (a fantastic book by the way!) I chose white 2/22 cottolin for the warp and very fine singles wet spun linen #10, which I doubled on the doubling stand for the weft. I treadled three different patterns. 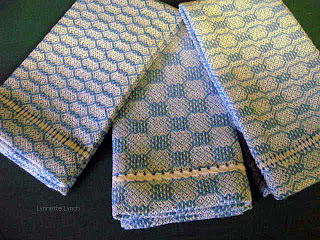 This fun project gave me a chance to try a few different hemstitches too. I tried ladder, trellis and Italian hemstitching, which is my new favourite, and is on the photo below. 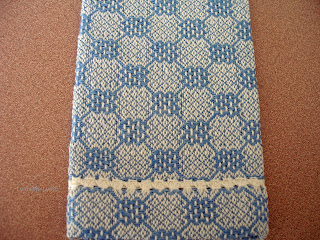 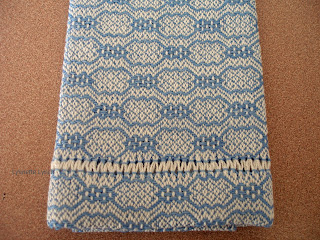 The photo above has trellis hemstitching.


The hand towel below is different in many ways as it is the only one with lilac weft, all the others are pale blue. I wove 2 inches in pattern for the turn under, then wove 1 pattern in linen, then 2 patterns in cottolin again. The hem is very firm and I think looks good. 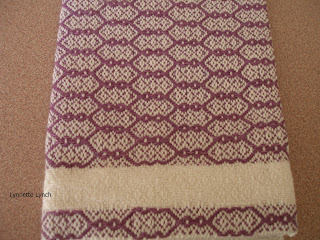 I did have a bit of warp left after I’d run out of linen weft, so wove myself a mat for my kitchen table. I used 2/22 orange cottolin for weft and I love it. I did three rows of Italian hemstitching, alternating white and orange. I took this photo with some Friskars scissors – same colour as the weft, like free range egg yolks! 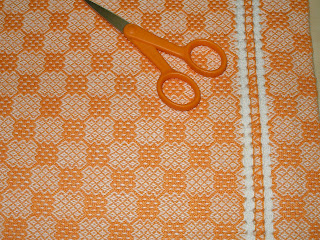 Beautiful towels!!! I especially like the orange very "fallish".

Fantastic!!! I love the orange ones;)

These are lovely. I love using towels as samplers. They give a sense of exploration and accomplishment all rolled up into one.