At the beginning of January I put on a 2/8 unmercerized cotton warp, eleven yards long in deep navy blue.  The plan was to make ten tea towels.
My pattern is a very lovely all over pattern in twill on twelve shafts.

By mid January I had woven eight tea towels. 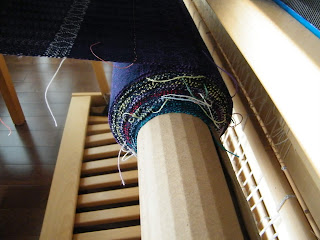 I had decided to weave the tea towels in two different colour groups.  The first group of five were woven in deep jewel tones; red, turquoise(2), purple and green. 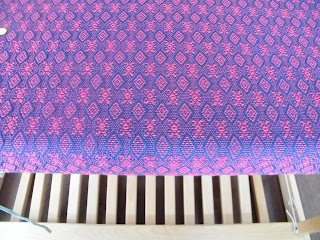 The second group were a bit of a stash buster in spring tones and I planned on weaving, pale blue, lilac(2), celery and yellow. 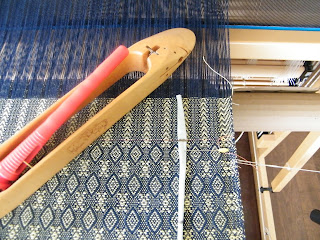 This is a photo of the celery tea towel and I had one of those wonderful moments when the pirn and the pattern ended at the same time ~ so immensly satisfying!

Then it happened, I went to the medical lab to do my regular blood work and the lab tech somehow damaged a nerve in my left arm while taking blood.  The pain was nothing less than astonishing when I extended my arm!  This put my weaving on hold while I am coming to grips with allowing the nerve to settle down, no full extention was what feels best. I don’t want to even begin to describe the kerfuffle of getting dressed in the morning!

The upside of a weaving haitus is that I started to knit a sweater.  I have only begun the project and my plan is to have the colour sequence, cream at the top, gold in the centre and navy at the bottom. 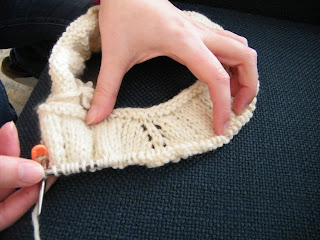 I’ve had my eye on this top down knit tunic by Drops Design for awhile.  It's called the Sweet Nothing Jumper and it is a free pattern from Garnstudio and can be found on the web or on Ravelry.  Wouldn't it be a fine thing to morph into a tall blond at the same time! 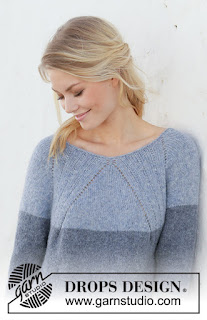 Today I was able to weave for a short time.  I can throw the shuttle pretty well, but I can only beat using my right hand.  Needless to say it's slow going but I am determined to finish this project and set up for our study groups new challenge by the end of February.

My garden shot today is of these sweet determined pansies stuggling after the wind and rain has bashed them about.  They still make me happy! 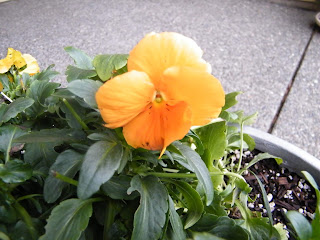 I'm so sorry to hear you have this nerve pain in your arm! ( I've never heard of this before.... yikes!) Your pattern is delightful but nerves take time to settle again.... maybe try some ice to bring down the inflammation ?

The sweater looks lovely too....

Oh no! I've never had any difficulty with people drawing blood. Now there's one more thing to worry about. :-( Wishing you a quick recovery.

Do hope you're well recovered by now. I've never heard of nerve damage from taking blood. Love your towels and the jumper pattern.