All the Mistakes Along the Way 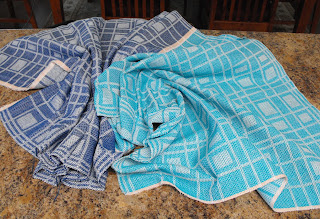 This is a story about how everything went a little bit wrong during a weaving project.  It all started innocently enough with a drall tea towel project. 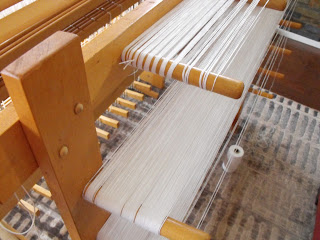 I pulled my warp in white 2/8 cotton and I carefully counted the ends.  It was going so fast and then . . . 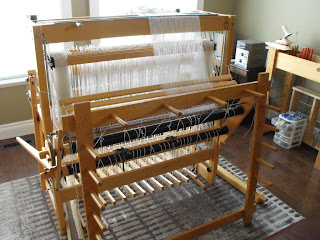 I put the warp through the raddle at the top of my loom and Mistake 1!  I had miscounted the threads on the warping board as doubles so I had actually only pulled half the warp.  So back I went to the warping board to finish pulling the warp. 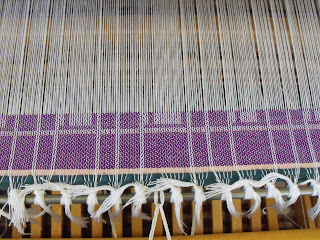 Mistake 2 was threading errors.  The threading plan prints up quite small and through an optical illusion on the plan I had placed eight threads wrong on all seven blocks.  This showed up as a thicker vertical line. Of course, I didn’t find the error until I started weaving.  So I unwove the weft then untied the warp from the cloth beam and finally fixed the threading errors. 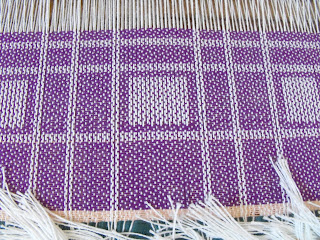 Mistake 3 was a treadling error.  The pretty drall boxes started a little wonky with a wavy line instead of the crisp box I wanted, but, again I didn’t notice until I went to advance the warp.  So I unwove the 3 inches back and tried again. 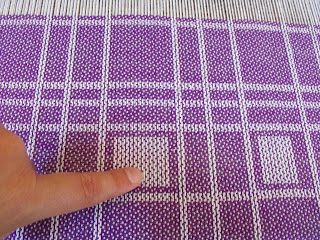 Mistake 4 was a floating thread.  In the first drall box so this time I unwove 6 inches and tried again.  I finally got my rhythm and the purple tea towel was finally finished. 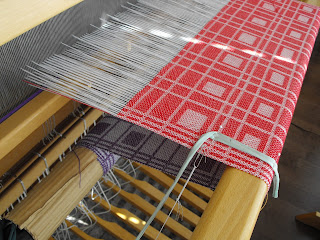 The other three tea towels on the warp wove up quickly, thankfully.  For all the mistakes and the slow start, these are probably the prettiest tea towels I have made!  Here are the finished tea towels in their Etsy photo shoot. 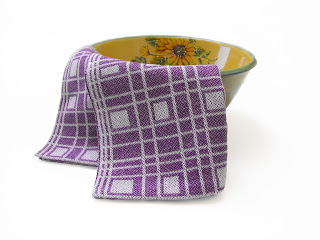 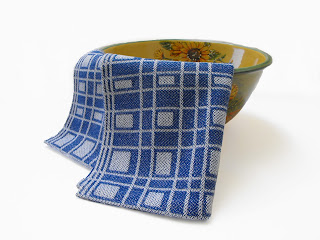 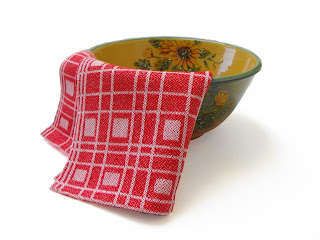 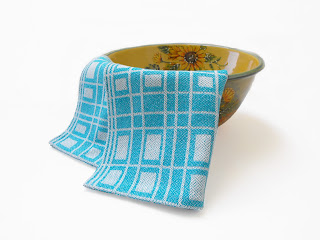 Final garden shot is the first Brown Turkey Fig (Ficus carica 'Brown Turkey').  We had Green Mission Figs ripen at the end of July and now after a couple of weeks the Brown Turkeys are starting!  This one was the size of a mandarin orange and was so sweet.....yum! 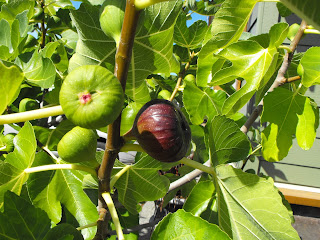 The towels are wonderful. I'm so glad I'm not the only one making mistakes the past few months, mistakes I never used to make. I'm blaming mine on my cataracts - the worst eye will be taken care of in a few weeks so hopefully I'll be mistake free after that.........

Ahhhh Orvieto....such a beautiful Italian hilltown! Wish we were there with you!

Every now and then I have a project just like this.... where you can do nothing right and its endless 'fixing'. I think I stick them out just to show it who's boss ( although my last flop beat me when I brought out the scissors)

Your towels look fabulous.... with a very fresh pattern and colours. It was worth hanging in there!

You should be in for a good run of things now having got it all worked out with the last warp.... *touch wood*

I admire your patience. I am not sure what I would have done. What size cotton do you weave your towels with. They are beautiful.

We almost always use 8/2 cotton for tea towels, we get ours from Maurice Brassard et fils in Quebec but it can also be purchased online from various vendors. The sett varies dependent on the weave structure but 20-24 ends per inch is the range.