What the heck has happened to Blogger???  This post took me 6 days, 2 computers, 3 browsers, 1 long distance phone call to a friend, 1 computer whiz and exiting and signing back in at least 30 times!

A few months ago I bought 400 grams of natural coloured 2/22 silk on eBay. After a few blocks of time in and out of my freezer, we are ready to add some colour!

In the past I’ve just skeined off hunks of silk willy-nilly, dyed it, and then tried to figure out the best way to use it. This time I thought I’d take a different and I hope a smarter approach and pre-made warps. The entire 400 grams made warps for 9 scarves, 8 have 182 ends and 1 has 145 ends and will need to be supplemented to get to scarf width. 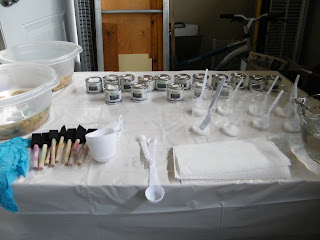 Here we are set up in the garage on a nice warm August afternoon! 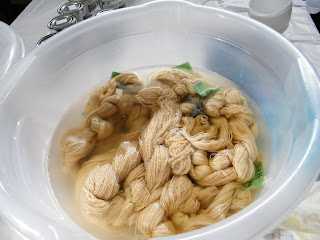 The warps are basking in soda ash solution while they wait their turn. 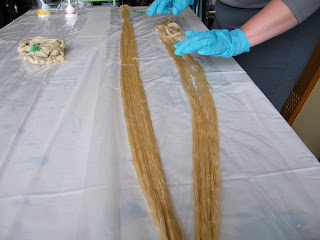 As we pulled the warps we secured them with Weft Twining so they would lay flat for painting. 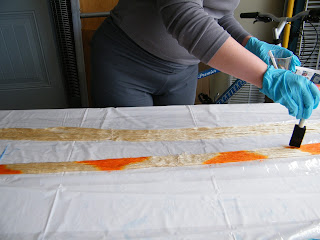 Then it is simply a matter of using a foamy brush to put the dye on the silk. You can see step by step photos on my post ‘To Dye For’. 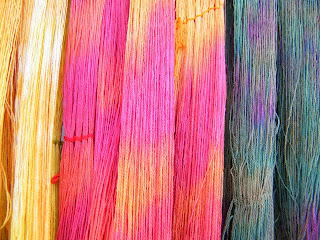 These are some of the reds and yellows, aren't they stunners. 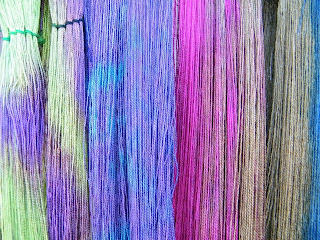 These are the blues and greens. You can see the Weft Twining  on the far left that we used to keep the warps flat. 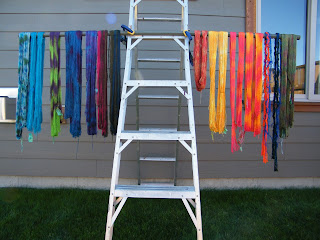 I hunted through my silk bins and found some handspun tussah about 2/5 size, some handspun 3/30 size that had been dyed in locks and ended up looking washed out after spinning and some 1/30 single silk that was an odd shade, so they too went into the pile. The final addition to the mix was 2 pink shibori scarves that Ngaire wove last March. Don’t they look great drying outside in the shade?
Posted by Lynnette at 11:44 AM

I admire your perseverancewith blogger.
The warps are great strong colours and look forward to seeing them woven. I haven't heard of putting silk in the freezer. Is this so it takes the dye better?

I put all protein fiber (wool, camel, silk, alpaca, etc.)that I buy into the freezer for a week, then take it out of the freezer for a couple of days, then back into the freezer and I repeat this process a few times. This makes sure that no moth larvae have arrived with the yarn! The alternate freeze/thaw ensures that any eggs will hatch and then I kill them too! I didn't see any problems when the yarn arrived, but better safe than sorry!
Cheers
Lynnette

Can't wait to see them woven up.

I haven't had a problem with blogger in the past few months but I was having problems the first 3 months of the year - then it cleared up like nothing every happened. I kept reporting it and visiting the forums but no help there.

There you are at long last! Sorry you have had so much difficulty posting.

The dye day looked like a lot of fun and I wish I could have been there to play too. I have silk warps all pre-wound, but my dye supplies are all over Hub's garage and I just never seem motivated enough to hunt them all down and get busy. Time to do just that! Your bright colours was motivation enough...

Hi Cindy,
I too spent hours on the help page and forums and finally I ended up adding a photo, closing out of blogger; then back in to add another. The weirdest thing was that for days I couldn't add text! Then I changed over to Chrome and it would allow me to limp through posting a blog. It took sooooooo long!

I love your reds and yellows, blues and greens. Stunning colors for sure. It's inspiring me to dye my white cotton yarn. I have Procion MX dyes. However, I am rusty as I truely dyed yarns when I took a dying course, which was part of my weaving Textile Arts program, long time ago, and since then did not do too much. So feeling uneasy, I guess once I experiment again, will feel more confident.