I had the second installment of my dental implant surgery and frankly it put me on the couch and on my keester for days! I still don’t have the replacement tooth but I’m sporting a nice yellow bruise on my puffy cheek and what I’m told is a rather lovely screw in my jaw! It's been 6 days since my surgery I still have no feeling at the implant site or the teeth nearby...frankly I see this as a blessing! All of this has been followed by a post surgery cold that kept me looking at the warp on my loom and living on lemon tea and honey!

My newest linen runner warp has been a brain teaser from the start. I had 64 ends leftover from my first runner warp and I wanted to use them, but no amount of counting threads made the numbers work into this project. I had also pre-pulled two other linen warps, one with 138 ends and the other with 164 but that was too many ends, so now I’m left with the original 64 ends from the first warp and another 68 ends from this one….ahhh yet another puzzle warp to figure out! 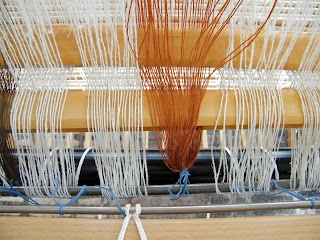 I wanted to add colour stripes to this warp but because the linen in the colour stripes is different from the white Normandy linen, I used the coloured threads doubled and placed them alternately with the white linen to make sure that the runner doesn’t end up with waves. I did thread each of the doubled coloured ends in its own heddle to try and minimize the bridging I expect with linen. I put the white linen on the loom first and then put the coloured linen over top vaguely in the positions I needed it and lashed it to the back beam bar. I put each warp though a different set of lease sticks and tied it all together to pull onto the loom. It really looks like jury rigged job, but it worked very well. 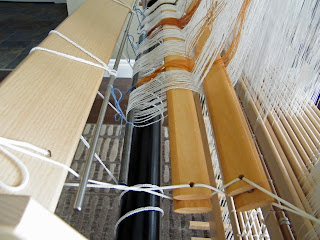 I was able to then thread alternately from the two different lease sticks to get the stripes in place on the loom. I love the blond, bronze and brown stripes which are going to fall into one of the three blocks (hopefully)! 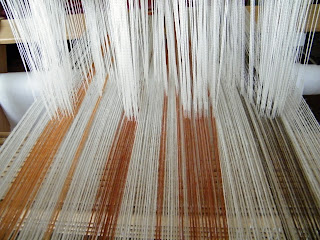 My plan is to weave runner number 1 with the same 5/2 soft gold mercerized cotton that I used last time and runner number 2 in blocks of the blond, bronze and brown linen.

So sorry you have been under the weather with dental woes. Hope things settle down quickly for you...

You are a braver weaver than me for trying to tweak that warp into place... and while under the influence I suspect!

It looks a pretty warp and we all look forward to seeing how it progresses!

I like the colours very well.I look forward to see when you have weaved a bit.
Hej from Monika in Sweden

I wish you a swift recovery! Toth ache is one of the worst aches to have. I look forward to see photos of the runner!