It's harvest time and I’ve been busy trying to keep up with the tomatoes, by planting over sixty plants means that there are tomatoes ready every couple of days. The raspberries are also ready so I had to make some jam too! 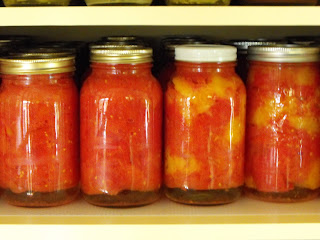 This post is about the table runners that I started back in August, they are a cotton warp and silk weft in a plum and a grey and the pattern is a fancy twill. Here they are side by side before washing. I was able to get them the same length with the same number of pattern repeats! 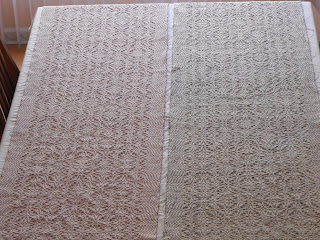 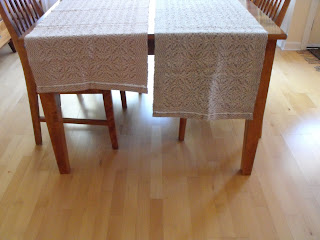 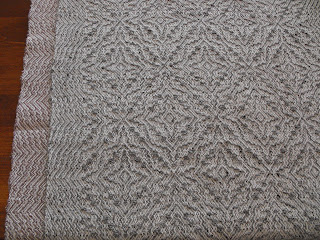 The both runners are finished with a two inch border with fancy hemstitching in the middle. The plum runner has trellis stitching and the grey has ladder hemstitching which I am going to be lacing a ribbon through to add a punch of colour. I haven’t bought the ribbon so I don’t know the colour yet but I am thinking blue. 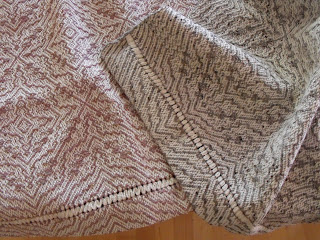 For the plum runner I chose the weft dominant side. I think the warp dominant side too white and it washes out the pattern, although in the picture it looks pretty good. 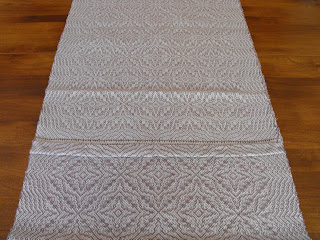 For the grey runner I also chose the weft dominant side but for a different reason. The weft is a thick and thin variegated grey and black silk so on the warp dominant side there are splotches of black that look like mistakes. 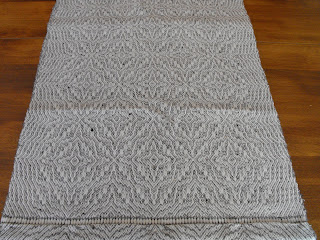 On the weft dominant side there is more colour and the black blends in better. 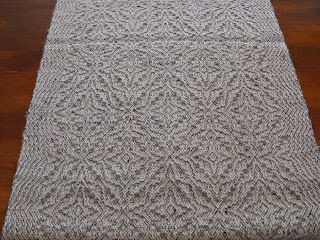 The runners were so much fun to weave and I love the colours. The runners made a nice change to all the scarves that I have been weaving. I really like these runners, so much so that I have tied on, but that is another post! 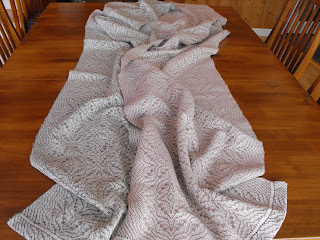 The runners are gorgeous.

I just finished canning ~ 200 jars of jam and sundries, so I know exactly how it goes with all that hot food into hot jars.

Maybe now that canning season is winding down I can get to work on that towel warp sitting on the loom.

I love your runners!!!

60 tomato plants? Yikes, that's a lot of tomatoes. Best wishes on all of your canning.

The runners are just lovely with the soft colors and the interesting designs.

The runners are, indeed, lovely. Is the weft the same fiber, same grist for both? If so, what do you think led to the striking size difference?

The silk is the same fiber, same grist and the same manufactorer. It was purchased from a weaver's stash reduction sale and she had bought them together to make a coat!
The plum is very uniform with a good twist but the grey was thick and thin and sometimes had no twist. So it was the grey weft that made for the different shrinkage.

The runners are so pretty!!!!!

I haven't done any canning in years. Tomatoes look wonderful and I'm sure will taste great this winter.

I just read your blog out loud to your father. His comment was that thankfully you didn't leave all of those tomatoes for us to do! I love how full and happy the pantry looks. Your runners are beautiful and do you proud.
Luv
Mum and Dad in beautiful France.