A number of years ago my husband Michael bought me a set of English Wool Combs for Christmas. I must admit that they’ve sat in their sweet little carry bag ever since! 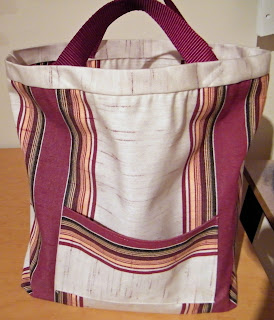 My Spinning Study Group came to the part in Deb Menz’s book about combining colour on wool combs, so out came the combs….. I had been given 50 grams of Ashford Rainbow Dyed BFL locks that were perfect for this purpose. I sorted these locks into two colour ways, red/orange/yellow and blue/green/purple and fanned out the tips a bit as they were matted. For this tutorial I've used the best photos from both batches, so sometimes I'm working the red batch and sometimes the blue! 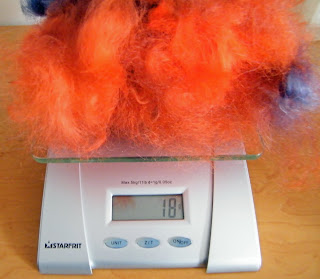 I weighed out the wool locks, my aim was to use only 20 grams at a time. 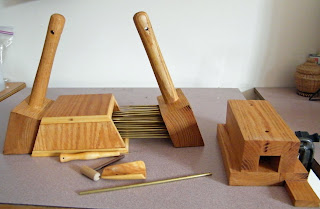 My combs are Four Pitch English Combs as they have four rows of hackles (these hackles are deadly sharp bronze pins). This particular set came with two combs, a protective sleeve, the base plate with C clamp and locking tool, a tubular straightening tool, a hook and a diz. 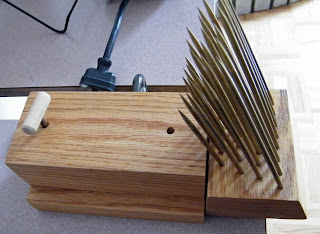 To start either one of the combs is placed in the holder, hackles upward and locked into position. 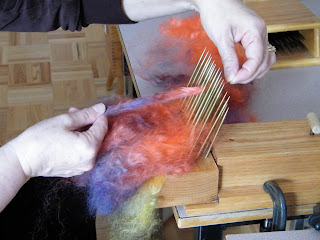 The locks are loaded onto the stationary comb; this is called ‘lashing on’ and each lock is placed on the upright comb, with about ½ inch of the lock in the hackles. Insert each wool lock with the cut end into the combs every time. Load the comb evenly about 2/3 full. 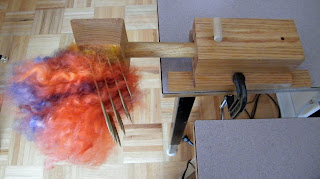 The comb is now turned on its side, again locked in place on the base plate. Spray lightly with water to keep the static down before you begin and throughout this process as necessary. 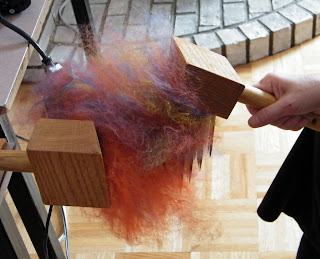 Take the second comb and using the very tip of the comb swing downward in a chopping motion through the tips of the locks on the secured comb, this is called ‘jigging’. Make sure you carry this motion through and don’t remove the comb until it has passed thought the locks, so that you don’t loop the fibres into a knot or force the fibre too far back into the hackles. 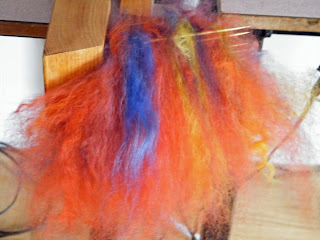 Each time you do this motion you will only go through the very tip of the bundle on the combs and the second comb will pick up a small amount of wool from the stationary comb, you can see the fibres straightening out. 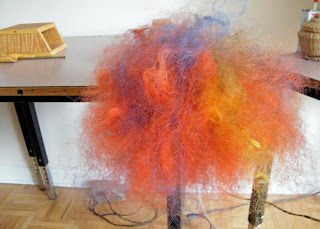 Eventually most of the fibre will have been moved from one comb to the other. With my system I can then just trade the combs and repeat the process. I will comb these fibres 3 times because my goal is not only to create ‘sliver’ but to colour blend as well. 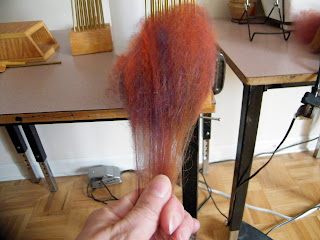 When I’m happy with the look of my combed fibre I shape the bundle with my hands into a tear drop shape then I start the ‘planking’ process. The idea behind ‘planking’ is to ensure that every part of the ‘sliver’ has the same quality of fibre, a nice mixture of lengths of fibre throughout, because the combs tend to pull off the longest fibres first. Put the stationary comb in the upright position to start this process. 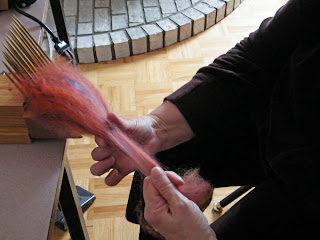 Then with your thumb and forefinger pinch a group of fibres and gently pull the wool away in a smooth motion. Leapfrogging with your fingers continue this until you have a length about 2 feet long. This sounds easier than it is; but if you don’t pull hard and pull really slowly, it does come off in a fairly neat long rope. Mine still have a thick and thin tendency, but in time I’ll get better! 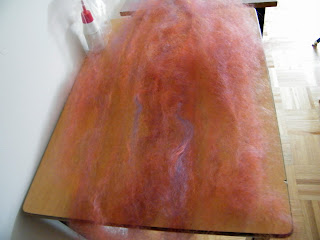 As the sliver comes off the comb lay them down, always laying them in the same direction. 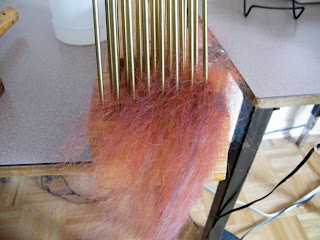 What’s left on the comb is all the noils, dirt and short fibres. I toss this away, but have heard of people adding this waste to carded batts and spinning it for novelty yarn. Really not my thing but there is quite a bit of waste (about 5%) and the frugal will despair! 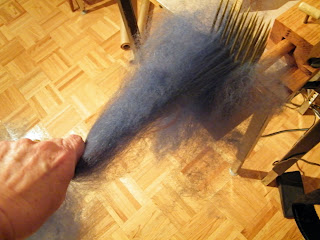 Now each of the lengths of sliver is lashed back onto an upright stationary comb by holding halfway down and swinging it down onto the comb and letting it run through your hands. Aim for long tails about 6-7 inches long. 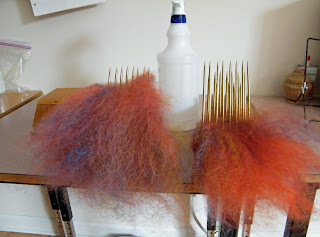 This is your last jigging and it’s really quick and easy at this stage. You can stop when you have equal amounts of fibre on each comb. Smooth the fibres into a beard shape pull the tip of the beard through the diz. I have a diz hook and it really helps. 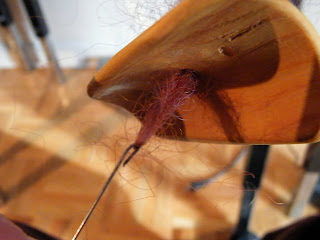 Gently draw off the fibre through the diz. 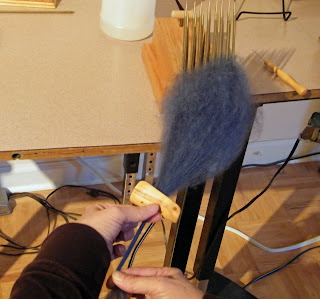 I do the finger pinch leapfrog and pull the beard to the left then to the right as I pull off the sliver. I’ve found that if I keep pulling straight on I get grid lock! 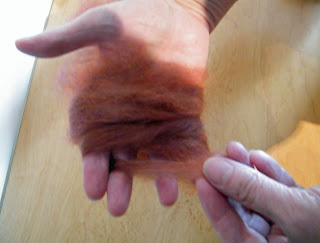 When it eventually thins out and breaks off I take each sliver and giving it a little twist as I wrap it around my hand to make a neat bundle. When you get to the end of the sliver, pop two fingers up and catch the end pulling it inside a bit. Just start spinning from this tip.
Here is my sliver all ready to spin! This is definately work for a process person! 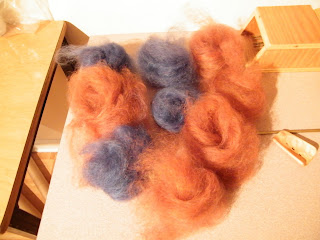 What an interesting post with some great pictures. The combs look like serious pieces of kit to be careful with !! The end result is outstanding and what a change in the colours. Thanks for sharing.

Ah, where were you and your fantastic tutorial when I had a set of wool combs? I tried my best but only had limited success. In time I sold them and moved on.

I think I made a mistake! The blending is fantastic...

Oh fun! I hope you post pictures of the yarn! ;)