This time I am doing a supplementary warp, which is going to be part of Mum’s workshop. The warp is navy Orlec and Celery Green cotton that is a slightly larger grist. The weft is the same Orlec and cotton. I had to get used to using two shuttles but watching the pattern grow was definitely an incentive! 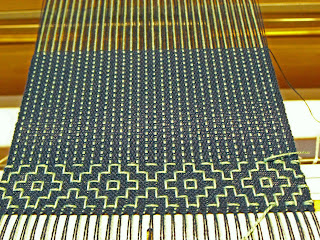 The pattern makes a lovely medallion, about 1” high, and on the other side makes crosses. The fabric is quite firm and would be suitable for upholstery. I really like it; it is so bold and graphic. 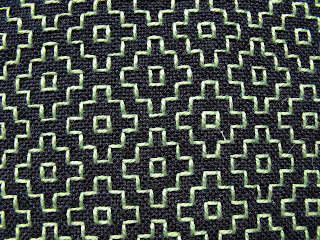 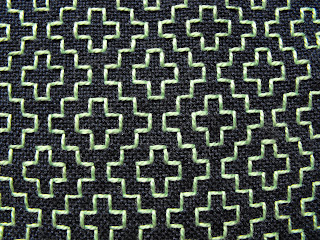 Ok, really firm (like a board) and unfortunately I put on enough warp for a scarf so I had to do some experimentation to find an appropriate pattern for a scarf. The pattern that I ended up with was to do a single motif at the beginning and end of the scarf and to drop the second weft, the green cotton, and just do the navy Orlec. What I ended up with looks like binary code, which is really cool. 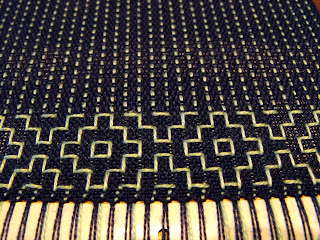 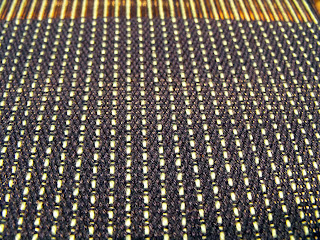 After washing the scarf has a much better drape but it is plain weave so it is always going to be very firm. 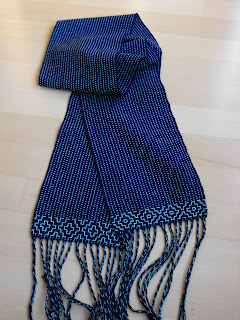 So did you notice the mistake? I can’t believe that I did this but when I did the motif at the end I was so excited to be done that I forgot to measure and the motifs don’t match size wise, my beat was softer at the end. 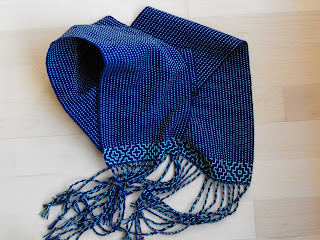 But I really like the scarf so I don’t mind that it is going to end up as mine!
Posted by Ngaire at 7:04 PM

I love the visual effect Ngaire!!
I thought a cushion cover would be neat done up like this. Pattern one side and the simpler side on the reverse.

Well done... I can't wait to see it in person sometime this year if you are keeping it.

Hello. I do like your supplementary warp project. And, it reminds me very much of Blackwork embroidery - my favourite kind of needlework. Congrats.

Oh what a great effect i realy love this pattern.

Absolutely beautiful!!! And I would have never noticed the "mistake" if you hadn't pointed it out.

I love the scarf, it's beautiful! And the visual effect is great! It's a lovely pattern which would be great for many ourposes.

I love the scarf, it's beautiful! And the visual effect is great! It's a lovely pattern which would be great for many ourposes.

It's an interesting and attractive pattern at both ends of the scarf. I rather like them being different.

Must be me but it took me awhile to notice the difference in the ends. What a breatful scarf!!!!!