Remember that mystery warp that came my way on the Cherryville Counterbalance Loom when I borrowed it? You know the one that I was just sure would be no problem to weave off with a smart easy twill pattern? What was I thinking? Arrrggghhhhhh! 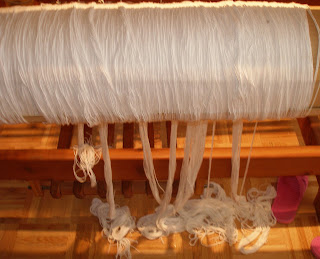 The warp is a huge mess… the warp must have come partially off at some point, and it was just looped back over the beam and hanging in knotty piles at the back of the loom! We had to do some major loom changes before we got to the warping process. The loom was using two dowels hanging from a third bigger dowel to hold the shafts in place. The dowels were different weights which didn't help the balancing problem, so off they came! 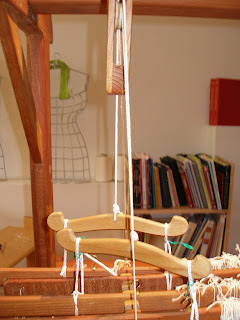 Although I still haven’t got this loom balanced correctly yet, I needed to keep moving forward so we changed the jury rigged dowels that were on the loom to the heddle horses that the manufacturer sent with the loom. Pretty aren't they? 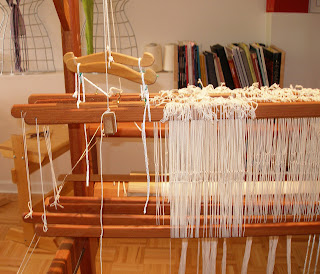 There are even nifty shaft holders to keep everything in place and the shafts even while you are threading, so we put them on too. 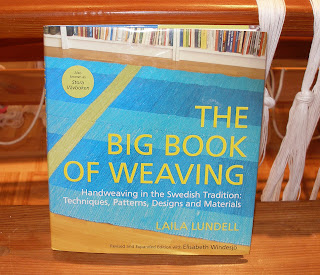 I'm using instructions on tying up a Counterbalance loom from Laila Lundell’s Big Book of Weaving. I’m getting there, but oh so slowly! I highly recommend this book for new and even intermediate weavers; and of course those like me who are trying out a new loom system. 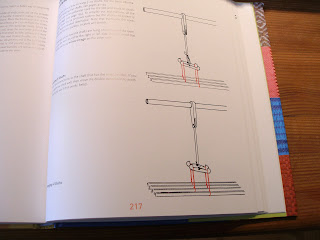 The book has wonderful diagrams of how the heddle horses should work and it’s very easy to understand how it should work; it’s just a bunch of fiddling that needs doing to get it to work! 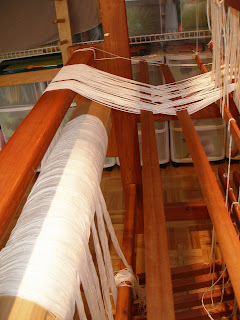 I unraveled the warp back to where I could see some order, about 3 yards back, and knew I needed lease sticks. 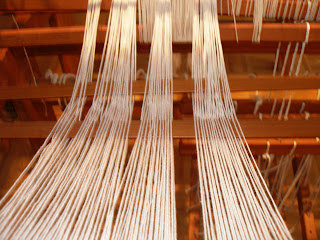 One by laborious one with my daughters' help we’ve pulled each thread through the lease sticks, over and under ad nauseum, then pulled through to the front where it now languishes in neat bundles. 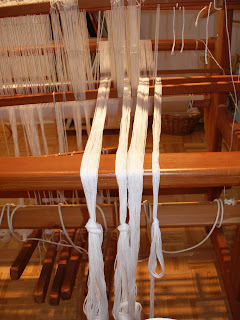 I’ve double checked the number of threads, yet again,and naturally just to make this a much longer process I have decided I don’t want to do the Landis Valley Linen pattern! I want to weave the whole warp off in one piece and then cut to the appropriate place mat size. Now back to the computer I go to figure out a pattern that doesn’t need borders. Stalled again.....Arrrgggghhh! Right now I have one of each major type of floor loom in the studio - very neat, but a bit crowded!

Weaving Words
The word clue comes from cliwen, Anglo-Saxon for a ball of yarn. There are many legends about adventurers finding their way out of dangerous mazes by using a ball of string…thus any aid to solving a puzzle became known as a clue!
Posted by Lynnette at 2:10 PM

I am in awe of your patience and persistence! I felt myself reaching for scissors just reading your post. Good thing I'm far away!!!

Thanks for the book tip!

Hah - I didn't know clue came from a ball of yarn. There are many balls of yarn that I didn't have a clue about and I didn't know how close I was to not knowing, or something.

Your patience with that warp boggles my mind. Your lucky daughter, to learn in her own home studio. So how *many* looms does this bring your count up to?

Wow! You are one ambitious lady;)

I'm thinking this must be really nice warp yarn if you are going to all this trouble! Like Sue, I would be keeping the scissors handy...
There are some nice overshot in the 'Best of Weavers' Overshot is Hot' Why is it you can't have a border? Too narrow a piece? I'm sure what every you come up with will be lovely.

Your studio space must be feeling the squeeze and I envy you your helper and companion. I'll have to 'rent a kid' :)

You have an enormous patience! I am sorry that I cannot offer any advice on counterbalance looms, but I have Laila Lundells book, and I have used it very much.

Several years ago I refurbished a counterbalance loom for the elderly mother of a friend. What a job that was! And it didn't come with a warp on it. I'm amazed at what you have persisted through. Bravo!

That happened once to a loom of mine that was in a public place for visitors to weave on - someone must have let the tension off the back beam and then panicked! It was really weird trying to sort it out - especially given that the front end of the warp was already woven by this stage! - but I got there eventually so a happy ending :)

Amazing! Have I understood you right. You have reformed the cross taking each thread up and over the lease stick. Apart from being a work of infinite patience I find it so reassuring to find that if a terrible catastrophe occurs thatI lose the cross that it is feasible to save the warp this way.
looking forward to the finished placemats.

I'm not familiar with counterbalance looms, but I remember how it was switching from jack to countermarche. Painfully slow at first, but it gets better. And faster.

You have more paitents then I do. If that would have been mine I'm sure it would have in a bag for the trash man. Sure do admire you!!!!

The center point of the horses should hang directly over the quarter point of the shafts. Check your Lundell book diagrams carefully, and that will help you. Another superb resource is Becky Ashenden's video Dress Your Loom the Swedish Way. She uses Glimakra CB looms to demonstrate. She also has a newer video for the Julia loom that shows setting up a CB loom. Have fun with your project!