This morning we woke up to -19 C and scads of squeaky snow. There has been no wind to move the snow, so it sits proudly on my deck like icing on a cake. 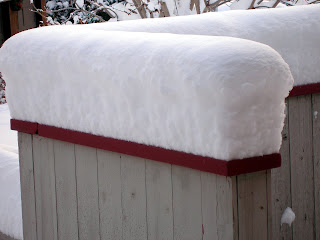 I think the birds could have a bit of trouble getting through this…. 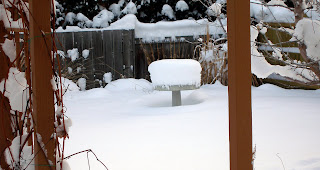 My poor kale looks like forlorn frozen mini palm trees now – I was hoping to get one final meal off of them before they froze completely, but a bit too late now. I’m going to leave them until the spring and see if they survive. 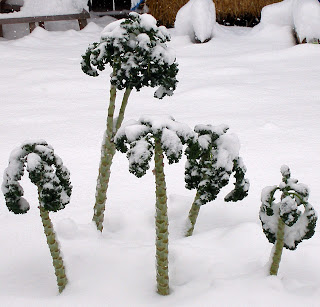 I have just put project number three on lily. This time it’s a fun weave so I put on 2 tencel scarves in undulating twill. The colours are not truly represented on my photo, but they are scarlet, red, ochre, gold, lemongrass, and silver – then reversed. Pretty loud for a colour fraidy cat like me.

I pulled the warp without cutting any of the threads so when I put the warp on the back beam I’d missed a couple of loops that were out of order, rather than untie everything – a chopstick did the trick. 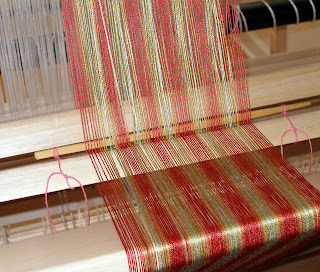 I’m using 2/8 royal purple tencel for the weft on this scarf and am switching treadling after 7”, then 4” until near the centre of the 78” scarf when there will be a run of 12”. 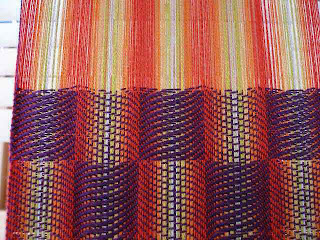 Since the warp moves from dark to light to dark repeatedly and the overall optical illusion is of three tubes side by side- interestingly I can feel a definite ridging on the loom, so there may be some actual physical tubes when they come off the loom. 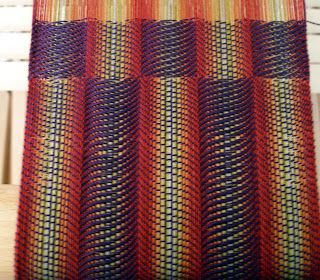 This is a really wonderful pattern. I am going to have to try something similar soon. I've worked with undulating twills before but it is dark to light color pattern that makes it so unique.

Wow, on my screen those bands of colour look like 'tubes'. What an interesting effect!
Love the colours and I wouldn't have thought of blending those with undulating effects. I can hardly wait to see the sample :)

I'll be curious to see if they really do turn into tubes. And your pictures of snow---how nostalgic they made me feel for my years in Wisconsin, Illinois, and Pennsylvania. Not that I want to drive in it or shovel it, you understand.........!